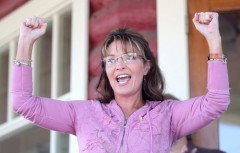 After last weekend’s appearance at the Tea Party Convention more than one person came to the conclusion that a 2012 run for Sarah Palin was less the punchline (enter the hand) for a joke than an increasing reality.

Leaving aside Palin’s incredible mastery at the art of the soundbite, and her undeniably popular appeal, and the celebrity aura she manages to generate while expounding on the general betterness of “real” Americans, is it possible for Sarah Palin to actually win an election in 2012? Numbers genius Nate Silver crunches…well…numbers and comes up with some extremely wonky but very interesting scenarios, which he explains in detail here. The general conclusion, and there are a lot of variables, is that Palin has a solid chance at getting the GOP nomination as long as no one asks too many detailed questions about anything (something which no one appears to be doing at the moment). Some interesting notes on the factors weighing into how Silver weighted the variables: