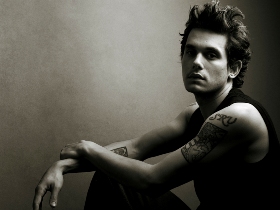 He did a lengthy interview with Playboy in which he discussed his racist penis, having sex with Jessica Simpson, dropped an n-bomb and much much more. Here are some highlights.

So here’s the full Playboy interview. There’s a whole lot there. But here may be the most insane quote to come out of the entire interview:

My dick is sort of like a white supremacist. I’ve got a Benetton heart and a fuckin’ David Duke cock. I’m going to start dating separately from my dick.

John Mayer has a “David Duke cock,” ladies and gentleman.

Now the singer/songwriter/tabloid fodder has not shied away from speaking his mind in interviews before, and it has led to some memorable exchanges. But this may be the height of his ‘he’s so edgy and refreshing’ honesty. While we’re talking about David Duke, here’s Mayer dropping an n-bomb while describing how much black people love him: “And by the way, it’s sort of a contradiction in terms, because if you really had a hood pass, you could call it a nigger pass. Why are you pulling a punch and calling it a hood pass if you really have a hood pass?”

MSNBC contributor Toure has been dressing down Mayer on Twitter this morning (no response yet from the musician). To the above comment he writes, “Whatever you wanna call it, you don’t have it any more.”

Update at 5pm: Mayer is apologizing on Twitter. Here’s some of what he wrote:

And while I’m using today for looking at myself under harsh light, I think it’s time to stop trying to be so raw in interviews…
It started as an attempt to not let the waves of criticism get to me, but it’s gotten out of hand and I’ve created somewhat of a monster.
I wanted to be a blues guitar player. And a singer. And a songwriter. Not a shock jock. I don’t have the stomach for it.
Again, because I don’t want anyone to think I’m equivocating: I should have never said the word and I will never say it again.

That girl, for me, is a drug. And drugs aren’t good for you if you do lots of them. Yeah, that girl is like crack cocaine to me…Sexually it was crazy. That’s all I’ll say. It was like napalm, sexual napalm…Have you ever been with a girl who made you want to quit the rest of your life? Did you ever say, “I want to quit my life and just fuckin’ snort you? If you charged me $10,000 to fuck you, I would start selling all my shit just to keep fucking you.”

That last line is actually from his upcoming single, “Your Body Is A Fuckin’ Wonderland And Shit”.

• Let’s go back to race – and specifically, Kerry Washington:

She’s superhot, and she’s also white-girl crazy. Kerry Washington would break your heart like a white girl. Just all of a sudden she’d be like, “Yeah, I sucked his dick. Whatever.” And you’d be like, “What? We weren’t talking about that.”

• And now, to Jennifer Aniston:

I wish I could be with her. But I can’t change the fact that I need to be 32…That woman was the most communicative, sweetest, kindest person. When people hear the record, I hope the songs make them think about their lives, not my life. Like, when you listen to Coldplay, do you think about Gwyneth Paltrow? I don’t write songs in order to stick it to my exes. I don’t release underground dis tracks

See, I always thought Chris Martin was like the British John Mayer.

• We’ll just let this entire exchange sink in for you:

PLAYBOY: What does the word womanizer mean to you?

PLAYBOY: You and Aniston got back together and broke up again in 2009. How many women did you sleep with in the eight months after the breakup?

MAYER: I’m going to say four or five. No more.

MAYER: But even if I said 12, that’s a reasonable number. So is 15. Here’s the thing: I get less ass now than I did when I was in a local band. Because now I don’t like jumping through hoops. It’s been so long since I’ve taken a random girl home. I don’t want to have to submit myself for approval. I don’t want to audition. I’d rather come home and edge my shit out for 90 minutes. At this point, before I can have sex I need to know somebody. Unless she’s a 14 out of 10.

• And finally, a little about the true love of John Mayer’s life – John Mayer:

What that explains is that I’m more comfortable in my imagination than I am in actual human discovery. The best days of my life are when I’ve dreamed about a sexual encounter with someone I’ve already been with. When that happens, I cannot lay off myself.

> Update: The interview was conducted by Mediaite contributor Rob Tannenbaum.

> Update at 5pmET: GossipCop points out Mayer has apologized for his use of the n-word.