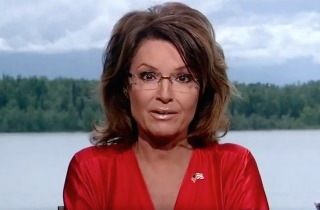 After rapper Azealia Banks shot off a series of tweets Sunday night saying Sarah Palin should be raped by a group of black men, Palin threatened to sue Banks Tuesday.

The lawsuit threat comes, oddly enough, after both parties had called for reconciliation. Palin did so on Facebook, while Banks wrote an apology on Tumblr. “I sincerely apologize for any emotional distress or reputational [sic] scarring i [sic] may have caused you,” she wrote.

“In my honest defense, i [sic] was completely kidding,” she continued. “I happen to have a really crass, New-York-City sense of humor, and regularly make silly jokes in attempts make light of situations which make me uncomfortable. As the fabric of the American Nation is EMBEDDED with racism, I merely made a raCIALly driven joke to counter what i [sic] believed to be real, raCIST rhetoric.” [Caps in original]

But in a statement to People, Palin indicated that she was still out for blood and was “in discussions with attorneys” on how to move forward. “Why is it if anyone looks at some liberal women the wrong way they can yell “RAPE” and ruin peoples lives (the Duke Lacrosse team, anyone?), but when serious violence is threatened against someone not of their political ilk, no one bats an eye?” she asks.

“Let’s be honest here: if a white girl were to say what this black girl is saying, the screams for the entire white population’s head would be louder than the nonsensical rap that Azealia spews all the way to the bank. The white girl would probably be locked up,” Palin argued.