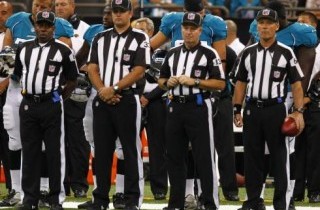 It wasn’t long ago there were more than a few who thought NFL Commissioner Roger Goodell would make a fine President.

He was respected, even feared.

He knew how and when to use his authority.

The 53-year-old is even married to a former FOX News anchor, Jane Skinner.

Politics are in his DNA: His father, Charles, replaced Robert Kennedy in the Senate following his assassination.

Few would argue that he presides over the most profitable, most revered, most entertaining product America has to offer outside of Apple.

But in what has been a disastrous week that may define his legacy, Goodell and the league have seemingly caved to the public relations disaster resulting from Seattle’s “win” over Green Bay Monday night, courtesy of the worst call in modern history by replacement referees.

Reports out of New York say enough progress in negotiations has been made between the league and the NFL Referees Association that the likelihood of the real officials returning in time to work this week’s games is high. Whether that means as early as this Thursday’s game (Browns-Ravens) remains to be seen.

Usually a negotiated end of a labor dispute is a good thing for both sides and particularly the guy in charge. But given the way the end of this negotiation played out (PR disaster suddenly followed by a willingness for resolution from the side that usually owns all leverage), and the permanent damage the episode has done to Goodell’s once-sterling reputation, the Commissioner is suddenly about as invincible as the Steelers defense.

Still, it seems like only yesterday when Goodell could do no wrong.

When he suspended Michael Vick indefinitely for running a reprehensible dogfighting ring, we cheered. When he levied record fines against the Pats and stripped them of draft picks for Spygate, same reaction. And when the Saints bounty program was revealed, he dealt with it swiftly and without ambiguity (long suspensions for players, coaches and even the general manager) regardless of criticism.

“He don’t play,” Michael Vick once said about Goodell. And with that kind of reputation, perhaps the Commish thought he could bully the real refs into making a deal as well.

But what happened next turned out to be the lowest point for the league since replacement players were used during the ‘87 strike.

From the outset, players quickly began to disrespect the authority of the replacements. Fights were breaking out all over the league, even extending one Monday night into an unwatchable four-hour-plus marathon. Many, particularly on defense, tried and mostly succeeded in getting away with blatant hits and violations.

Problem was, in a world of big screens and HD, the fans at home playing referee were watching all of this unfold before them, much to their disgust.

Know this: Never has the outcome of a regular season game like Monday night’s made the top of the so many cable news cold opens (and during a heated Presidential campaign, no less).

We’ve all seen the end of Packers-Seahawks by now: A mini-Hail Mary from Seattle’s Russell Wilson to M.D. Jennings, er, Golden Tate. One replacement ref calling it another a touchdown, the other an interception…

A replay is conducted, the call impossibly stands, and Seattle coach Pete Carroll celebrates so demonstratively he somehow makes fans outside of the Pacific Northwest loathe him even more.

Twitter blew up. Facebook followed suit. Even the three people left on MySpace were talking about it. Everyone couldn’t believe the call and proceeded to scold the poor replacement refs who were clearly out of their league (pun intended).

They would then direct their anger not at the real refs who were locked out, but at the Commissioner.

So what was this whole dispute about?

Was Goodell standing his ground for good reason?

Primarily at issue (without boring you with the details) were salaries and pensions. On the pay front, an NFL referee on average makes about $78,000 per year (compared to an MLB umpire, who makes more than 50% more). Remember, this is a league that boasts about $10 BILLION in revenue annually.

In short, the dispute is over a difference of $16 million for referees if all their demands are met, or the cost of five tickets and ten beers at Cowboys Stadium.

Goodell taking a hard stand over such a small amount of money now looks more foolish than the Seahawks new uniforms. It was also the result of underestimating fan backlash if replacement refs actually (a) cost a team a game (check ) and (b) put players at risk by allowing games to get out of control (check).

“President Goodell” once seemed to be a cool idea.

He could have run on his record as the proud quarterback of the NFL’s unprecedented growth, eye-popping profits, celebrated image, and no-nonsense approach to the rule of law.

But with the by the spectacle that accompanied a needless referee lockout, Goodell is now more toxic than Todd Akin.

On behalf of all fans, only now do we truly appreciate the job you do…