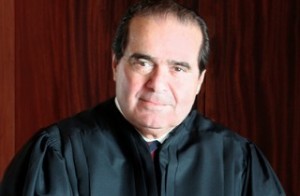 Scalia joined Chief Justice John Roberts‘ chief dissent, but dissented separately to voice just how disappointed he was in the decision. Scalia voiced indifference to the issue of gay marriage itself, but wrote that it was the legislatures’ responsibility to address the issue, not the courts.

“Today’s decree says that my Ruler, and the Ruler of 320 million Americans coast-to-coast, is a majority of the nine lawyers on the Supreme Court,” Scalia wrote. “The opinion in these cases is the furthest extension in fact— and the furthest extension one can even imagine—of the Court’s claimed power to create ‘liberties’ that the Constitution and its Amendments neglect to mention.’”

“This practice of constitutional revision by an unelected committee of nine, always accompanied (as it is today) by extravagant praise of liberty, robs the People of the most important liberty they asserted in the Declaration of Independence and won in the Revolution of 1776: the freedom to govern themselves.”

He continued to say that it was unimaginable that the drafters in the of the Fourteenth Amendment back in the 1860’s intended to make gay marriage bans unconstitutional. “The five Justices who compose today’s majority… have discovered in the Fourteenth Amendment a ‘fundamental right’ overlooked by every person alive at the time of ratification, and almost everyone else in the time since.”

Scalia even went after the justices’ personal history, accusing them of being unrepresentative of the American public. “Four of the nine are natives of New York City. Eight of them grew up in east- and west-coast States. Only one hails from the vast expanse in-between. Not a single evangelical Christian (a group that comprises about one quarter of Americans), or even a Protestant of any denomination.”

“The strikingly unrepresentative character of the body voting on today’s social upheaval would be irrelevant if they were functioning as judges…” Scalia wrote.