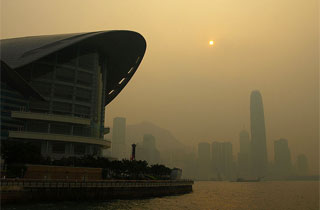 Readers, we’re SO ANGRY at how messed up the weather’s been lately, and we know you all are, too. For instance, last weekend in Chicago, it was above 70 degrees, and then it dropped below freezing. We’re so mad that we already packed our puffy coats and snowboots in storage. We’re so furious that we want to be punch something. We would punch a snowstorm if we could.

Alas it’s impossible to be mad at the soulless, impartial caprices of Mother Nature. But we can be mad at China! No, really, we can blame China for our miserable weather!

A new report published in the Proceedings of the National Academy of Sciences revealed that China’s extreme air pollution could be intensifying storms over the Pacific Ocean, leading to changing weather patterns in North America and causing it to go totally schizoid. Specifically, as the Guardian reports, particles released into the air by Chinese coal-powered factories and vehicles “is leading to more intense cyclones, increased precipitation and more warm air in the mid-Pacific moving towards the north pole.” Considering that China’s air pollution is so bad that it causes 40 percent of all air pollution-related deaths every year, that’s a lot of air pollution.

And according to the paper’s abstract, all that warm, polluted, Commie air creates erratic storm systems throughout freedom-lovin’ America:

One effect, the study says, is an “intensification of the Pacific storm track”, a narrow zone over the ocean where some storms that pass over the US begin to gather.

“Mid-latitude storms develop off Asia and they track across the Pacific, coming in to the west coast of the US,” said Ellie Highwood, a climate physicist at the University of Reading. “The particles in this model are affecting how strong those storms are, how dense the clouds are, and how much rainfall comes out of those storms.”

So basically, Chinese air pollution isn’t just lowering life expectancy, quality of living, and job growth in China — it’s making us miserable in the US, too. Get your act together, China.

[The Guardian]
[Image via Wikimedia Commons]