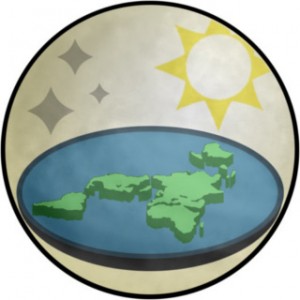 Atlanta-based rapper B.o.B. has been catching some flak lately for espousing the theory that the Earth is flat (a notion which is somehow still a thing). While it’s easy to mock B.o.B. and his fellow flat-earthers, scientists maintain that their brand of science denialism is no better than the one shared by basically every Republican presidential candidate, according to an article published in ThinkProgress Tuesday.

“Both climate denial and flat earthers reject tested and retested evidence and scientific consensus,” ThinkProgress writes, “yet climate denial is a central tenet of a major American political party.”

“I think there’s not a substantive difference between flat earthism, climate change denial, or indeed Holocaust denial or creationism,” Josh Rosenau, the programs and policy director at the National Center for Science Education, told ThinkProgress. “All reject abundant evidence in order to prop up an ideological bias and reinforce group identity.”

A cognitive scientist noted that if there were no political or commercial interest in the doubting climate change, those who did so would be mocked out of the mainstream — much like flat-earthers.

Ted Cruz has said that climate change “is not a science, it’s a religion.” Marco Rubio has said that there is no point combatting climate change, since “America is not a planet.” Donald Trump has dismissed climate change as “not a big problem at all,” and blamed it on Vladimir Putin. Jeb Bush has acknowledged that the climate is changing, but believes that the science is not conclusive as to humanity’s role in it. Dr. Ben Carson has said that “there is no overwhelming science that the things that are going on are man-caused and not naturally caused.” (Sen. Lindsey Graham and George Pataki agree with the science in support of man-made climate change, but both men have dropped out of the race.)