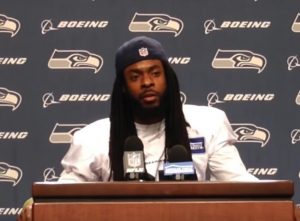 Seattle Seahawks cornerback Richard Sherman got into a heated exchange with a local radio host on Tuesday, during which he told the host “I’ll ruin your career.”

The exchange was chronicled in the Seattle Times. According to the report, Sherman was asked a question by Jim Moore, a host for Seattle’s ESPN Radio affiliate. Moore asked about Sherman criticizing a play call

Moore asked a question of Sherman stating that what he didn’t understand is that Bevell is trying to call plays he thinks will work but that Sherman appears to think he has a “better handle” of what should be called.

Moore said he didn’t. Sherman said, “Then you should probably stop.”

At the conclusion of the press conference, Sherman confronted Moore:

“You don’t want to go there. You do not. I’ll ruin your career.”

Said Moore: “You’ll ruin my career? How are you going to do that?”

Said Sherman: “I’ll make sure you don’t get your media pass anymore.”

Said Moore: “Is that right?”

Said Sherman, as he continued walking away: “Yes it is.”

Afterwards, Sherman took to Twitter to express his regret for the incident.

I appreciate the role the media plays and they have a tough job. I let it get personal today and I regret that. Next one should be fun