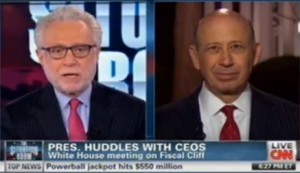 As part of his outreach on the fiscal cliff negotiations, President Obama met with a murder of CEOs from top companies, including Goldman Sachs CEO Lloyd Blankfein. After the meeting, some of the attendees spoke to reporters, but according to Buzzfeed, the uniformed Secret Service took the unusual step of running interference for Blankfein and his entourage, restricting access to the Northwest Drive outside the West Wing until they could make their exit.

As Blankfein and his entourage exited the West Wing, reporters shouted questions at him and tried to approach him to ask about his meeting with the president on the fiscal cliff. But even camera crews trying to get to their stand-up locations for evening news live-shots were prevented from crossing the driveway until Blankfein passed.

The White House pool report, from The Daily Caller‘s William Rahn, made no mention of this:

The business executives who met with President Obama today began leaving the West Wing at about 6:15 p.m. Most left without comment, but a handful who took questions from reporters, including Comcast CEO Brian Roberts, described a positive and amicable meeting with the president.

The Northwest Drive is reporter turf, along with the White House briefing room and surrounding area, and the press office. It’s very unusual for the Secret Service to restrict access to any of these areas, mainly because it’s not usually necessary. If someone wants to exit the West Wing without being set upon by reporters, they can easily go out the Northeast entrance, or even be picked up at the West Wing doors, which reporters keep about a 20-foot distance from.

If not, the result is sometimes a scene like this:

Why, then, was it necessary for the Secret Service to run interference for Blankfein and Co.? At first blush, it seems almost like an object lesson in entitled dickery, but as it turns out, it was entitled dickery and then some. Blankfein couldn’t avoid the Northwest Drive because he was doing a TV hit for CNN, so he needed those Secret Service guys to keep the rest of the reporting rabble off of him. Otherwise, those wretches might have asked Blankfein if the “entitlements” he wants to help gut include the $12.9 billion in bailout funds his company received:

The White House press corps isn’t a bunch of giggling groupies that Lloyd Blankfein can just select from to pleasure him, which is why it makes sense that he would avoid them at all costs, but the Secret Service has no business acting as his PR Sherpa. That’s our driveway, and if Lloyd Blankfein wants to use it, he has to at least ignore us.