Newt Gingrich Slams House Republicans For Negotiating With President Obama: ‘Get A Grip!’

Newt Gingrich Slams House Republicans For Negotiating With President Obama: ‘Get A Grip!’ 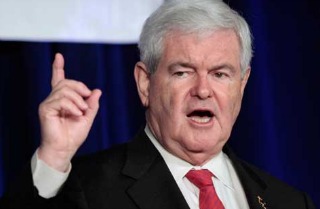 Former House Speaker Newt Gingrich has a message for his fellow Republicans about the looming fiscal cliff: “Get a grip” and simply stop negotiating with President Barack Obama.

Speaking at the Ronald Reagan Presidential Library in Simi Valley, California, Gingrich said about House Republicans, “They are the majority. They’re not the minority.” His words got stronger as he went on, telling Republicans he didn’t believe they needed to “form a ‘Surrender Caucus.’”

As The Daily Caller reported, Gingrich apparently believes there isn’t a “cliff” looming, let alone any kind of crisis at all. “There is no fiscal cliff. It’s absolute, total, nonsense,” he said. Blaming the entire situation on the President, Gingrich went on,

Gingrich sarcastically began asking his audience whether they wanted to be held personally responsible for the demise of the country. He questioned,

“Now, do any of you want to be the person who stands up and destroys America by violating the fiscal cliff? Do you want to go on one of the national networks and explain that you are so reactionary, so out of touch with life, that you don’t care that America is going to die late on Thursday?”

Assuming, of course, that no citizens, let alone House Republican wants to be singlehandedly responsible for the downfall of our nation, Gingrich offered up one last bit of wisdom,

“So my number one bit of advice to the congressional Republicans is simple: Back out of of all of this negotiating with Obama. The president is overwhelmingly dominant in the news media. You start setting up the definition of success finding an agreement with Obama, you just gave Obama the ability to say to you, ‘Not good enough.'”