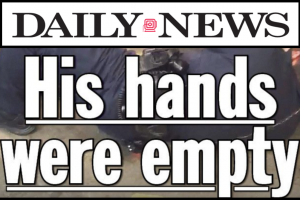 One of the areas of media commentary we’ve been featuring heavily as of late as the tabloids right here in New York City: the conservative New York Post, and the left-leaning New York Daily News, each of whom use their 12″x10″ real estate to ridicule, mock, or slam the story of the day.

Thursday morning’s edition of the Daily News unsurprisingly put the emphasis on the tragic shooting death of 37-year-old Alton Sterling, the Baton Rouge native who was killed by two white police officers Tuesday. The death in a convenience store parking lot set off a wave of protests; the leader of the local NAACP called on the police chief and mayor both to resign.

Never one to shy away from the controversial and declarative front cover, the Daily News depicted the image of Sterling’s body for all to see:

Reaction from social media was as swift as it was mixed. While many feel that the cover is an unfortunately appropriate way to convey the tragedy, others questioned — as they have in the past — if the New York Daily News took things a step too far:

@NYDailyNews really?! Did this actually have to be the front cover?!

@_PaolaMassiel @NYDailyNews If you think the image is being used for sales, then you’re lost.

@_PaolaMassiel @NYTallPeople @NYDailyNews people need to see this. It is important that it does sell so people see this!

And to all those who think it’s “tasteless”? If that was my father I’d want that picture on a billboard. @NYDailyNews

@Sportsfeeder1 tabloids will tabloid. This is their business, good and bad.

@NYDailyNews wtf is this?!

@NYDailyNews We sanitize the fuck out of this shit. Maybe it’s time people saw the truth?

And now I’ll have to avoid the @NYDailyNews covers all day tomorrow. I do not get this judgement call.