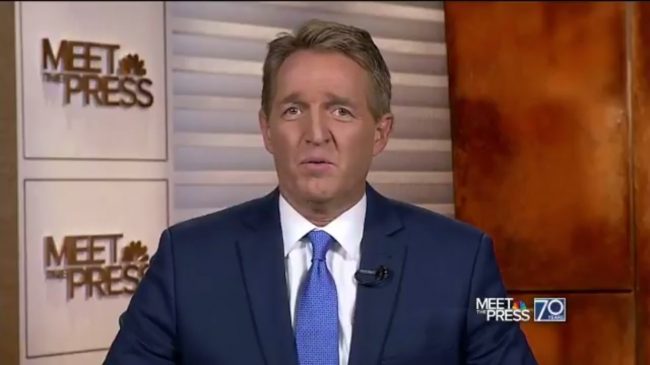 CBS News reports that Flake unloaded not just on the Commander-in-Chief but also Congress for not doing enough to conduct proper oversight:

“Our presidency has been debased. By a figure who has a seemingly bottomless appetite for destruction and division. And only a passing familiarity with how the Constitution works,” Flake said, according to prepared remarks obtained by CBS News ahead of the speech. “And our Article I branch of government, the Congress (that’s me), is utterly supine in the face of the moral vandalism that flows from the White House daily.”

He called Congress “willing accomplices to this calamity” and at one point he even said, “We may have hit bottom.”

Flake has made a few speeches on the Senate floor in the past year denouncing the President, and just this week he slammed Trump’s “demand” to the DOJ:

Determining who or what is investigated by the DOJ is not the President’s call. Deputy AG Rosenstein’s referral to the Inspector General is the right move. The White House should in no way hinder or impact the ongoing work of Special Counsel Mueller