SEO Is No Longer A Viable Marketing Strategy For Startups

Many of the today’s most successful informational sites such as Yelp, Wikipedia and TripAdvisor relied heavily on SEO for their initial growth. Their marketing strategy (whether deliberate or not) was roughly: 1) build a community of contributors that created high-quality content, 2) become the definitive place to link to for the topics they covered, 3) rank highly in organic search results. This led to a virtuous cycle where SEO drew more users, leading to more contributors and more inbound links, leading to more SEO, and so on. From roughly 2001-2008, SEO was the most effective marketing channel for high-quality informational sites.

I talk to lots of startups and almost none that I know of post-2008 have gained significant traction through SEO (the rare exceptions tend to be focused on content areas that were previously un-monetizable). Google keeps its ranking algorithms secret, but it is widely believed that inbound links are the preeminent ranking factor. This ends up rewarding sites that are 1) older and have built up years of inbound links 2) willing to engage in aggressive link building, or what is known as black-hat SEO. (It is also very likely that Google rewards sites for the simple fact that they are older. For educated guesses on which factors matter most for SEO, see SEOMoz’s excellent search engine ranking factors survey). 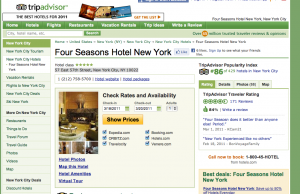 (TechCrunch had a very good article on the TripAdvisor’s decline in quality).

In contrast, this cleaner and more informative page from the relatively new website Oyster ranks much lower in Google results: 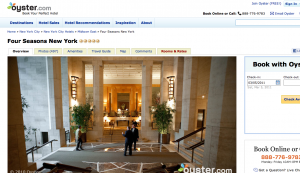 As a result, web users have a worse experience and startups are incentivized to clutter their pages with ads and use aggressive tactics to increase their SEO when they should just be focused on creating great user experiences.

The web economy (ecommerce + advertising) is a multi-hundred billion dollar market. Much of this revenue comes from traffic that comes from SEO. This has led to a multibillion-dollar SEO industry. Some of the SEO industry is “white hat,” which generally means consultants giving benign advice for making websites search-engine friendly. But there is also a huge industry of black-hat SEO consultants who trade and sell links, along with companies like content farms that promote their own low-quality content through aggressive SEO tactics.

Google seems to be doing everything it can to improve its algorithms so that the best content rises to the top (the recent “panda” update seems to be a step forward). But there are many billions of dollars and tens of thousands of people working to game SEO. And for now, at least, high-quality content seems to be losing. Until that changes, startups – who generally have small teams, small budgets, and the scruples to avoid black-hat tactics – should no longer consider SEO a viable marketing strategy.