Shep Sides With Obama: Shootings Happen Here ‘More Than Anywhere Else in the World’ 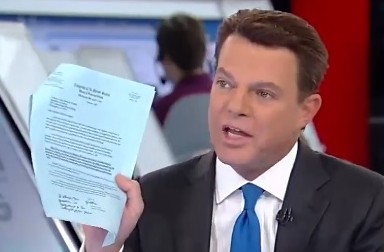 Fox News’ Shep Smith, who was tasked with covering the events of Wednesday’s mass shooting in San Bernardino, California as they unfolded, presented a statement from President Barack Obama live on the air Wednesday. At the conclusion of the brief remarks, the veteran newsman agreed with the President’s line of thinking on the issue of gun death frequency, even addressing political rivals of Obama’s who have criticized his rhetoric after previous tragedies.

“President Obama called today for a bipartisan effort at every level of government to address mass shootings,” Smith began.

Quoting from the President directly, Smith read, “We don’t yet know what the motives of the shooters are, but what we do know is that there are steps we can take to make America safer and that we should come together on a bipartisan basis at every level of government to make these rare as opposed to normal.”

Smith continued to read from Obama’s remarks, repeating, “We should never think that this is something that just happens in the ordinary course of events because it does not happen wth the same frequency in other countries.”

The Fox News anchor then offered his own unique view of the situation and the President’s remarks, saying:

“[President Obama] got a lot of partisan pushback on that from his political opponents but the fact of the matter is, among developed nations, that’s the truth. These sorts of mass shooting with the regularity of where they occur in the United States — you don’t find that in other countries… you can extrapolate what you want.”

“I can report to you with certainty that it happens more here than anywhere else in the world,” Smith concluded.