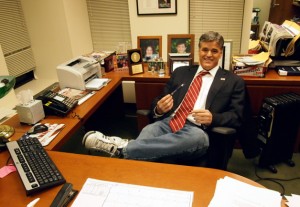 In a wide-ranging interview with GQ‘s Mark Anthony Green, in which he hits on everything from skinny jeans to his friendship with Herman Cain, FOX News’ Sean Hannity dropped a few interesting bombshells, saying if he were President, he’d like Rick Perry as his Secretary of Defense (” I think he’d be pretty tough”), and accusing the media of going light on President Obama in 2008, when his connections to Bill Ayers bubbled up. He also revealed his favorite designer to be… Donald Trump.

I do like Donald Trump’s ties. He sent me a bunch of them and he’s got some nice ones.

On the topic of Obama’s presidency, Hannity didn’t pull any punches. Although he gave Obama credit for dispatching Gaddhafi and Bin Laden, he said that George W. Bush is smarter. “Bush had a better understanding of economic principles, understood the concept of individual responsibility, freedom, debt, deficits better than Obama,” Hannity told Green. In another exchange, Hannity contends that Obama has actually done more to hurt the country than he has to help it:

GQ: He’s ended the war in Iraq, killed Bin Laden, removed Qaddafi from power—do you think that Barack Obama has done some major good in his presidency?

Sean Hannity: I’m going to answer your question honestly. I think he’s done great damage. His governing has hurt the country. He seems like he’s got a lovely family—I look at the person a lot deeper during the campaign than most people. I looked at what inspired him, he said in one of his books that black liberation theology inspired him. I had Reverend Wright on in March of 2007, he was never seen again throughout the campaign. I looked at Bill Ayers, an unrepentant terrorist. I thought that the media gave Obama a pass.

On some lighter topics, Hannity says that if he had to pick a vice president from the current pack of GOP contenders, it would be Newt Gingrich, the man he considers to be the smartest of the pack. And although he believes Mitt Romney is the candidate to beat, he thinks Cain is a “real contender” and says that Gingrich could also beat Obama.

You can read the entire interview at GQ.com. And Hannity can be seen at 9 p.m. weeknights on FOX News. His guest on Tuesday? Condoleezza Rice, one of the few politicians not brought up in the interview.