Should Gary Johnson Be Allowed Into Tuesday Night’s Debate? 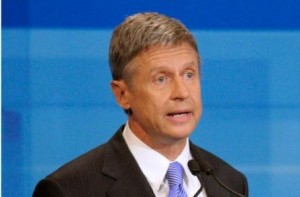 Tonight’s Washington Post/Bloomberg News debate will be shedding one candidate from September’s debate in Florida: former New Mexico Governor Gary Johnson. Johnson, polling in the low single-digits, hasn’t shown enough recognition to allow inclusion, failing to meet the criteria set by the organizers of the debate, including his not having in appeared in three previous debates (he has appeared in two). But Johnson supporters–including fellow candidate Newt Gingrich–argue that he needs the debate to gain more traction.

“Fairness requires Gov. Johnson to be included in tomorrow’s debate,” Gingrich tweeted on Monday. “I encourage Wash Post/Bloomberg to invite him.”

TIME magazine’s Alex Altman profiles Johnson’s campaign so far, painting a picture of a man who is so unsure of how much support he has, he openly wonders if anybody will show up to pedal alongside him in his “Ride for Freedom” bike tour through New Hampshire. “This is Johnson’s campaign in a nutshell,” Altman writes. “An epic adventure that has proven lonelier than he expected. Johnson’s name rarely appears in taxonomies of the Republican field, and when it does it’s usually preceded by the words fringe candidate.”

Altman tells the story of a recent town hall, when Johnson showed up to a New Hampshire high school classroom featuring a crowd of four reporters…and nobody else. Johnson’s robocall system apparently had a glitch and voters weren’t informed about it. So Johnson did a Q&A with the reporters there and expressed his frustration:

It doesn’t appear that the debate organizers will be allowing Johnson in tonight, no matter how many pleas they get from his supporters. Or Newt Gingrich. But it does raise an important question, especially given that Herman Cain‘s rise is likely fueled by his personality and willingness to actually answer questions in the previous debates: if the rules continuously conspire to shut Johnson out of debates, will he ever be able to gain enough poll votes to be able to qualify for future ones?