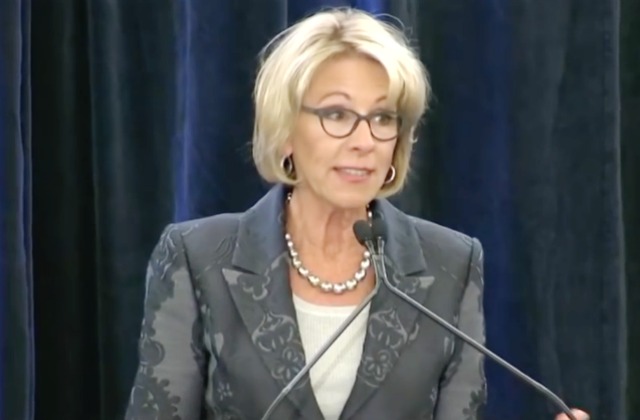 Education Secretary Betsy DeVos went ahead with her planned commencement speech at Bethune-Cookman University on Wednesday, despite a petition signed by 50,000 rejecting her invitation.

But maybe DeVos should have taken the hint: her speech at the Daytona Beach university was met with a firestorm of brutal heckling deafening boos.

The disastrous commencement was well documented on Twitter, thanks to a number of reporters in attendance. The event got off to a rocky start as Betsy DeVos was awarded an honorary doctorate:

As DeVos took the podium, a large amount of BCU graduates turned their backs on her:

Graduating students turn their back on Betsy Devos when she started her commencement speech, Jackson had to intervene. pic.twitter.com/zwe82gjHgA

The boos and heckling were so loud, DeVos had trouble getting through her speech:

A taste of the room right now pic.twitter.com/jGn3gHuwLM

“Aw, shut the fuck up,” someone cries to cheers as DeVos speaks.

At one point, the Dean of BCU was forced to intervene, telling the crowd, “If this behavior continues, your degrees will be mailed to you!” Her threat did not appease the graduates:

Holy cow, #bethunecookman dean interrupts DeVos speech, threatens students “your degrees will be mailed to you!” They persist! pic.twitter.com/nkcqZrbXJ0

The boos continued through the end of DeVos’ speech: