Shutdown Salvation: Democrats Save GOP from Themselves with Push for Obamacare Delays 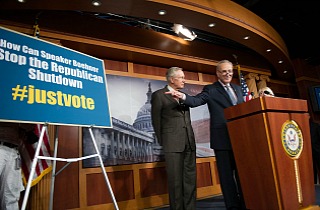 “Let me get this straight,” voters are now asking themselves in quiet, contemplative moments. “I know the Republicans tried to prevent Obamacare from being implemented. They pushed so hard that it resulted in a government shutdown. Democrats fought that. I agreed with them. With the public behind them, they forced the Republicans into disgraceful surrender and retreat. And now, with that victory behind them, they are telling me that the Republicans were right all along?”

This introspection probably self-terminates at this point, just before the voter in question comes to the inevitable conclusion that they were misled and served only as a pawn in a political game. It is only human to avoid confronting the fact that they have been led astray. They may not even admit this self-evident and incontrovertible reality to themselves yet, let alone to a pollster. But the seed of doubt in the Democrats’ stated opposition to the impetus for the government shutdown has taken root.

This White House fancies itself immune to the pressures of the news cycle. In truth, they are more sensitive to negative press than they let on. The media constantly assured themselves and their audiences that they would be covering the disastrous roll-out of the ACA more, if only the GOP had not provided them with the juicer, more immediately pressing shutdown story to cover. This week, those promises were fulfilled.

The media’s full-court press on the ACA roll-out and its myriad failures began on Monday. By Tuesday, CNN’s Sanjay Gupta was asking Health and Human Services Sec. Kathleen Sebelius if she had discussed resigning over this debacle. By Wednesday, a handful of vulnerable Senate Democrats and a few prominent House Democrats were entertaining, or had openly called for, delays in the individual mandate to own health insurance or a delay in the penalty associated with non-compliance with that mandate.

The news cycle moved so rapidly that the White House shed the aloofness it covets as a virtue and announced a delay in the penalty phase. Administration officials then lashed out at news organizations who dared call this delay a “delay.” They said it was merely an alignment of deadlines – deadlines which have not been altered. Conveniently, they disregarded their own rationale for ignoring the meager number of people signing up for the program at this early date. In early October, they said that, just as in Massachusetts, there would be a rush of signups among the healthy, young people required to ensure the ACA is an economically viable policy as the penalty phase approached and the deadline to purchase insurance drew near.

This illusory talking point is merely the latest to be slaughtered upon the White House’s altar of political expediency.

The government shutdown was never desirable and Republicans who caused it and now celebrate their actions as having brought about this stunning political reversal are flattering themselves. The shutdown is being redeemed, but the anti-Obamacare devotees in the GOP only have Democrats to thank for this condition.

And the public does associate the government shutdown with the implementation of the ACA. “I really don’t like the Republican tactics, but at least now I can understand why they are so pissed about this,” a retired California teacher, reeling from sticker-shock, told the San Jose Mercury News in early October. “I was laughing at [House Speaker John] Boehner – until the mail came today,” said another self-identified California Democrat. While they disagreed with the GOP’s tactics, they could almost find justification for their tactics. And now, Democrats are validating their concerns and the GOP’s tactics.