Some Might Take Trump’s Candidacy Seriously, But Now That The Media Does, He Could Be In Trouble 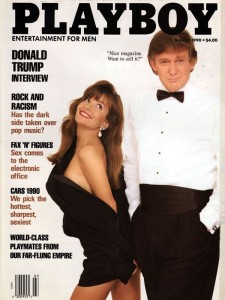 “We don’t know anything about Obama!”

That has been the rallying cry of some of the President’s detractors ever since he became a serious candidate. His supposedly “mysterious” past has haunted him his entire first term. However, it’s interesting to note that the candidate who’s been gaining the most from the fabled blank pages in Obama’s biography, Donald Trump, is a man with no mystery. People know everything about Trump. And a lot of it, on first glance at least, doesn’t look good. So how could he become President?

This is the question proposed in an intriguing editorial by Richard Cohen in the Washington Post. Do we know too much about Trump for him to be a serious candidate?

“American political life is doing away with the back story. Increasingly, politicians are becoming religious types, Eagle Scouts who mastered all the knots, a monasticism leavened only by the occasional martini. They do not stray. They avoid midlife crises. They came out of the womb with certainty, avoided acne, married the first girl they dated and went on to make a fortune in something or other.

Then there’s Trump. He is all back story. We know his flops. We know he curses. We know his women. We know he lies. We know he has bad taste — in buildings, in ties, in associates (the late Roy Cohn, for instance, and now Roger Stone). He did not treat his wives well (according to them) and Ivana, in particular, retaliated by enlisting the New York gossip columnists. And now we must add this nonsense about Barack Obama possibly having been born outside the United States. Trump’s a birther. Why not? He’s everything else — and, anyway, there’s no such thing as bad publicity.”

Cohen clearly isn’t a fan of Trump’s, but this is a big problem for his possible candidacy. Don’t believe it? Just look over at Reddit where a popular news story is the description of this 1998 law case:

“Vera Coking, an elderly widow from Atlantic City, knows firsthand the power of unaccountable government agencies. The Institute for Justice successfully defended Vera against the condemnation of her home by a State agency that sought to take her property and transfer it—at a bargain-basement price—to another private individual: Donald Trump. Trump convinced the State agency to use its “eminent domain” power to take Vera’s home so he could construct a limousine parking lot for his customers—hardly a public purpose. And unfortunately, cases in which government agencies act not as protectors of constitutionally guaranteed rights, but instead as agents for powerful, private interests, have become all too common.

Thanks to IJ’s advocacy, Vera Coking won in court and continues to enjoy her home of more than three decades.”

Yes, in the early 90s, Trump (or rather his company, not that it matters in a presidential election) tried to take away an old lady’s house so he could build a parking garage for limousines. Remember when the McCain campaign thought they could derail Obama because of a simple comment he made to Joe the Plumber that alleged to demonstrate he was a socialist? Yeah, imagine how much traction this story can and will get.