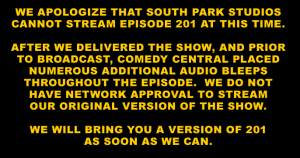 All this past week, both fans of free speech and those of cartoons with talking feces as characters have been wondering how the creators of South Park, Matt Stone and Trey Parker, would handle the death threats they received from Islamic extremists after last week’s episode. Would they continue to show Muhammed (bear costume or no) or would they bow to pressure. When the second episode in the two-part series aired last night, another big question was raised. Muhammed’s appearance was even more censored than last week, his name was now bleeped out in addition to him being covered up by a big black box. This left fans wondering whether this move was made by the creators or if, like an episode from 2006, executives at Comedy Central had added the bleeps against the artists’ will. A post made on the show’s official site this morning now makes it clear that the network was responsible.

For the past few years, Parker and Stone have been streaming every episode of the show for free on their site, South Park Studios. The episodes (which air with ads to recoup losses) are added to the site one day after they air on Comedy Central and run uncensored meaning that every filthy word that comes out of Stan, Kyle, Cartman, or Kenny’s mouth is heard in full. This has been the case for every episode of the past few seasons except for last night’s. When users attempt to view the episode, they instead get the following text:

“We apologize that South Park Studios cannot stream episode 201 at this time.

After we delivered the show, and prior to broadcast, Comedy Central placed numerous additional audio bleeps throughout the episode. We do not have network approval to stream our original version of the show.

This answers definitively whether or not there was network interference with the episode. It doesn’t, however, say which audio bleeps were added by Comedy Central and parent company Viacom. In addition to every utterance of Muhammed’s name, the entire last scene, where all the characters explain the moral of the story, was bleeped. It is our guess that the network added the Muhammed bleeps and Parker and Stone bleeped out the last scene in response as a way of protest. However, we won’t know until some kind of statement is made.

The New York Times called Comedy Central this morning and got no more information than what was already made clear by the post.

“On Thursday morning, a spokesman for Comedy Central confirmed that the network had added more bleeps to the episode than were in the cut delivered by South Park Studios, and that it was not giving permission for the episode to run on the studio’s Web site.”

As South Park fans know, Muhammed has been seen in full on the show. Back in 2001, an episode entitled “Super Best Friends” showed a cartoon version of the Prophet and gave him multiple lines of dialogue without incident. An interesting twist to this whole story is that that episode is still available, completely uncensored, on South Park Studios. Why that episode can appear online but last night’s can’t is unclear.

All in all, this whole situation is both a step forward and step back for the freedom of speech and the battle against religious extremism.