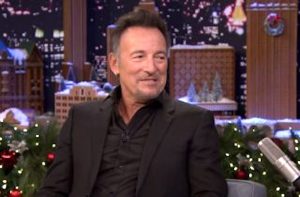 In recent days, singers Andrea Bocelli and Jennifer Holliday have pulled out of Inauguration performances. Now, another musical act is following suit.

The B Street Band, a Bruce Springsteen tribute band, has pulled out of their scheduled appearance at the Garden State Presidential Inaugural Gala.

Band founder Will Forte (not to be confused with the former Saturday Night Live star), said that the group’s defection can be attributed to Springsteen’s feelings about President-elect Donald Trump.

“Our decision is based SOLELY (sic) on the respect and gratitude we have for Bruce and the E Street Band,” Forte said in a statement to Backstreets, a Springsteen fan website. “Bruce’s music has been the foundation of our livelihood. The B Street Band would not exist without the talents of Bruce and our E Street brothers.”

Springsteen has been highly critical of Trump, calling him “a moron,” and saying he’s “scared” by the prospect of him taking office.

The B Street Band has played with several members of the E Street Band before. Guitarist Steven Van Zandt, drummer Max Weinberg, and late saxophonist Clarence Clemons have all made cameo appearances with the tribute group.

E Street bassist Garry Tallent, made his disapproval with the B Streeters known via Twitter on Thursday.

Please tell me this is more fake news. Or at least a joke. https://t.co/I8pyvHKPsy

The B Street Band played the Garden State Presidential Inaugural Gala in both 2009 and 2013. Forte had told Rolling Stone that the band’s decision to play the event was not political.

“We don’t even go into politics that deeply,” Forte said. “The guys in the band are so easy-going, I don’t even know if they have any politics.”

But Bruce Springsteen certainly does, and those politics caused Forte and his bandmates to reconsider their Inauguration appearance.