Stand Up, America: Racism for Ratings a Cottage Industry That Needs to be Stopped
Column

Stand Up, America: Racism for Ratings a Cottage Industry That Needs to be Stopped 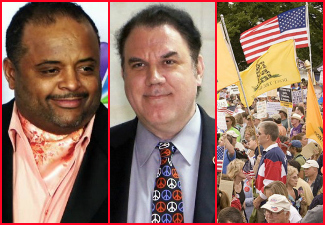 It really needs to stop.

Race-baiting for ratings. Unfounded charges of racism. Invoking the KKK and tying it to the tea party.

It’s time to take the country back–because this is getting seriously old already–and tell anyone who engages in this ridiculous conversation to offer an ounce of proof that that Ku Klux Klan is a huge influence in the Tea Party movement. Double-dare them. And when they can’t, simply tell them to shut the hell up.

Kudos to Roland Martin—an African American and a Democrat—for taking this passionate stand on his radio show Thursday afternoon after a caller defended Florida Democratic Congressman Alan Grayson—just a vomitous human being who represents everything deplorable with Washington today—and his decision to link the friggin’ KKK with the Tea Party in a fundraising email.

Of course, Grayson ultimately wins here, because he got the attention he wanted, got his name in the paper, got mentioned often on CNN, Fox, and MSNBC, and got the money he solicited from those blind enough to buy what he’s selling. And being in a safe Democratic district, it appears we’re stuck with this winner for as long as he wants to stay in power.

The whole link to the Tea Party began in earnest on a national level by then-MSNBC-host Keith Olbermann and advanced by Chris Matthews, who can’t seem to escape 1967 in his 67-year-old mind. Back to Olbermann, he labeled the tea party the “Tea Klux Klan” in February of 2010 while portraying party activists as wanting to deny all minorities voting rights by using the schemes of the Jim Crow South. When Olbermann was reminded by tea party groups that MSNBC’s entire primetime lineup consisted of old white men and one middle-aged woman, he simply doubled-down with the charge night after night without, again, a hint of proof… while never once having a tea party member on to debate any issue.

Like Grayson, Olbermann was absolutely bludgeoned by conservative media outlets demanding an apology. No matter, the portrayal was sticking in progressive circles, a portrayal still very much alive to this day, including by Olbermann’s once-removed replacement, Chris Hayes.

Earlier this week, some questioned if Hayes meant to spell out “KKK” when he tried to connect the Tea Party’s Ted Cruz, Rand Paul, and Marco Rubio to the Klan by putting their faces on Kings from a card deck (because the graphics department must have been out of Jokers that night). Here’s all you need to know: more than a few media outlets have publicly questioned Hayes on this tired tactic, including this one, and Hayes has yet to issue a confirmation or denial.

This from the guy who portrays himself as the beacon of civil discourse in the messy world of cable news. But when you’re the host who is single-handedly bringing down an entire primetime lineup from a ratings perspective, desperate times call for implying senators are racists without foundation. Stay classy…

Of course, there will always be those who push the KKK/tea party narrative. It’s part of the contract of being a sightless ideologue, an angry troll who is programmed without any ability to be objective, and it’s sad. For some really fun examples, check out some of the comments below. Sad indeed…

This is not to say this kind of rhetoric isn’t a two-way street. Freedom Watch’s Larry Klayman is the most recent and blatant example in buffoonery from the hard right after demanding the President “put that Koran down” at a rally to re-open a World War II Memorial during the partial government shutdown. In making such a ludicrous statement, Klayman tainted an entire (rightful) protest after the media correctly focused on this one comment. Sean Hannity and Mark Levin aren’t any better when they continually call the President “Barack Hussein Obama” on their respective radio shows. The implication (“Look! Al-Qaeda in the White House!”) is painfully clear and patently sophomoric.

Examples are everywhere, but rest assured that neither party has the upper (or in this, lower) hand here.

Many in the media aren’t helping, either. The most provocative sound bite from a politican—the zinger that gets personal—always wins the day over a poignant perspective on policy or a pragmatic political stand. The more hyperbole, the more chance it will be seen on an outlet outside of C-SPAN.

The media invariably encourages this stuff…all while condemning it. It’s enough to make your hair hurt.

In the end, we need more folks like Roland Martin. Those who don’t go along for the racism ride when an accusation is unjustified just for the sake of towing the party line.

Note: racism still exists in this country. It exists around the world. But outside the wars you see in the media, on television… wars fought by extremists of both parties who really need to pipe down, things are getting better. People are more tolerable, more accepting of other races. These positive steps are quietly happening in communities across the country, carried out by folks who aren’t inclined to stir up hatred to justify their own pathetic existence, to juice their ratings, to increase their Twitter followers.

Take the country back from the cottage industry that is racism for ratings.