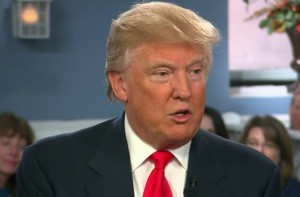 Donald Trump frequently mentions that he went to school at Wharton School of Finance whenever he talks about the differences between him and his political rivals. Unfortunately for him, it seems that quite a few students at his old stomping grounds are very upset with the direction of his presidential campaign.

Approximately 1,400 current and former students of the University of Pennsylvania business school have signed an open letter to the mogul alumnus, blasting him for his incendiary political rhetoric. The letter reads that Wharton students “are taught to embrace humility and diversity,” and that they are “deeply disappointed,” that Trump’s campaign constantly finds itself embroiled in controversy and racially-charged snafus.

“We, proud students, alumni, and faculty of Wharton, are outraged that an affiliation with our school is being used to legitimize prejudice and intolerance. Although we do not aim to make any political endorsements with this letter, we do express our unequivocal stance against the xenophobia, sexism, racism, and other forms of bigotry that you have actively and implicitly endorsed in your campaign.”

The letter goes on to say that Wharton strives for diversity and tolerance, yet Trump has used his educational pedigree as a “platform for promoting prejudice and intolerance.”

“Your discriminatory statements are incompatible with the values that we are taught and we teach at Wharton, and we express our unwavering commitment to an open and inclusive American society.”

You can read the complete letter here, via Medium.