Study: 7% Of Babies Already Have Online Profiles And Email Addresses

Study: 7% Of Babies Already Have Online Profiles And Email Addresses 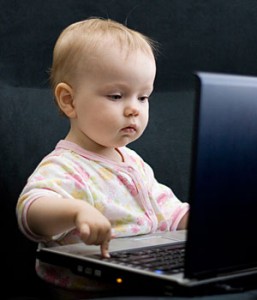 Have you ever received a Friend Request from someone you didn’t know? Maybe it was someone you forgot. Maybe it was spam. Or maybe it’s just that that person can’t even talk yet. A new study by the Internet security firm AVG has found that 7% of babies already have social network profiles. Clearly online social media has revolutionized the way people can be forced to look at boring pictures of their friends’ kids.

Here’s some of the other information that the study found:

The whole thing makes some strange amount of sense. Not only is it an easy way to share information about the little miracle that’s just entered your household, you can save a good email address before it gets snatched up in the time it takes for your tyke to pick up typing. Weird though are the figures circling through Twitter that say that 5% of unborn babies already have profiles. We can’t find those numbers in the AVG study so they may have just been the product of someone misreading the article. If they’re true though, it almost sounds like an inverted version of the old “Vanishing Hitchhiker” ghost story. We can see it now:

It was a dark and stormy night when a young man was travelling along a desolate road outside of a small town. Suddenly, he received a Facebook Friend Request from a young woman he didn’t know. A few minutes later he saw a diner and pulled in. The only person inside was an old man sitting by the jukebox. Our hero approached him and asked if he knew the girl from the Request. The old man looked at him quizzically and then responded.

“Of course I know her. She’s my daughter. However, she’s won’t be alive for another five months!” DUH DUH DUUUUUUUH!