Sunday Show Round Up: ‘Who Politicized Benghazi?’ A Play in Infinite Acts
VIDEO

Sunday Show Round Up: ‘Who Politicized Benghazi?’ A Play in Infinite Acts 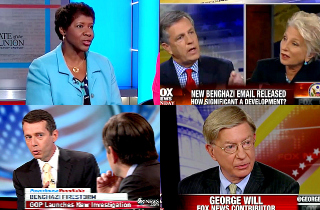 That this question would dominate the Sunday shows yesterday was overdetermined. The revelation last week of a White House email that’s a smoking gun if you think in clichés has rekindled the GOP’s Benghazi fire, though the email itself is more smoke than gun.

But the GOP is “discovering” new Benghazi “smoking guns” all the time, as you know if you watch Fox News, which treats the story as an always-full well of provocation. What causes Benghazi to o’erreach and spill into the network shows? The horse latitudes of other stories don’t hurt: there’s little about Ukraine that hasn’t been said already, and what else are you going to talk about, unemployment insurance? Sunday shows abhor a vacuum, and the partisan howling Benghazi never fails to inspire makes for great filler.

Or, as Gwen Ifill put it:

Yup. Talking about South Sudan won’t help you re-litigate the 2012 election, which Republicans now feel has been invalidated in part by the fact that the Obama administration ginned up a tall tale about some video and some protest. De-certify 2012, and you can use it to undermine everything the administration does; Obama’s not supposed to be president anyway. That’s certainly easier than proposing policies of your own.

To put it another way, via George Will:

“It’s only a matter of time before Democrats raise the following question: would there be a select committee if it didn’t want to have the power to subpoena the former Secretary of State Hillary Clinton for reasons obviously pertaining to presidential politics?”

To ask “Who politicized Benghazi?” is to beg that question. As Will tacitly admits, to still be talking about twenty-month old talking points is itself a politicization. But what else are you going to talk about, missing Nigerian girls?