Sunday with The Week: McChrystal vs. Obama, Across The Dial

Sunday with The Week: McChrystal vs. Obama, Across The Dial 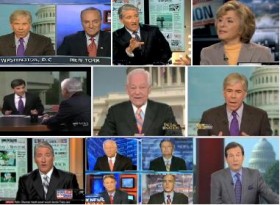 The Week magazine is doing a cool new thing: A quickie-clipshow video of Sunday talk show moments called the “Sunday Talk Show Briefing.” (It’s actually not that new, they’ve been doing it for about 2 months.) Either way, it’s a great idea — the Sunday Shows are a big time investment, even if you just watch a few of them — and who knows what will end up being the clip of the day? Never mind all those other Sunday shows — Reliable Sources, Fareed Zakaria GPS, [Christiane] Amanpour, The Chris Matthews Show, whatever marathon Bravo happens to be showing. It’s great when someone else does all the work for you, and The Week is smart to jump into that breach — and make it embeddable (thank you, Week! Video below).

This week’s focus is on the adminstration pushback against General McChrystal, who followed up his leaked memo with public comments in London about how urgently he needs more troops in Afghanistan. Awkward. I’m not sure if these clips resolve anything, but it does make you feel a little less worse about turning off the TV and going for brunch. See below:

I will say that a brief browse through the various videos on The Week’s site reveals an awful lot of old white men. And also, so much Lindsay Graham. That’s not to say that there are no women on the shows — U.S. Ambassador Susan Rice was on Meet The Press just yesterday, though didn’t make it into the clip reel (NEVER. ENOUGH. LINDSEY. GRAHAM). But generally, the quick survey is pretty revealing – the Sunday Shows are still pretty much a bastion of, well, mostly the same people. Agree? Disagree? Tell me so in the comments; I am happy to be corrected. In the meantime, below find Susan Rice’s comments about Afghanistan and McChrystal. The key phrase seems to be something along the lines of “President Obama is going to do what is necessary to protect the American people.”

MS. RICE: Well, let me begin by pointing out what has been and remains our objective here. The objective, David, is to prevent al-Qaeda from being in a position to launch attacks on the American homeland again. Our goal is to disrupt, dismantle and defeat al-Qaeda in Afghanistan and Pakistan, and prevent it from obtaining safe haven to come and attack us as they did on 9/11. That is the clear goal. The president set that out in March. And he said in March, when he laid out the policy, that after the Afghan elections in August we would review where we are; we would review the goals, the methods and the resources needed to obtain them. In the interim we’ve had several things happen. We’ve had General McChrystal come in with his assessment of the situation on the ground. He has said that the Taliban is, is gaining in strength and that, that we have a somewhat deteriorating security situation in Afghanistan. We’ve had progress in Pakistan, critically important political security and even economic progress. And at the same time we’ve had an election in Afghanistan which has not lived up to the hopes and expectations of the Afghan people. We are now in a process that I’m part of which is a very responsible process to assess where we are, how the circumstances now affect our strategic goals and what methods and resources we need to obtain them.

GREGORY: But I just…

MS. RICE: That is a responsible, necessary process.

MS. RICE: We are fully resourcing it. We have put in place 21,000 additional troops. They are still completing their deployment. We have increased the number of civilians and we have increased the financial resources to Afghanistan and Pakistan substantially. The president has to make a judgment based not only on the military assessment of his commander on the ground, also the inputs of his diplomats, his ambassadors. He has to look at the military, the security situation. We have NATO partners involved. We also have Pakistan next door, which is critically important to this equation, and the entire global effort to fight and defeat al-Qaeda. The president, as commander in chief, has to look at more than what is happening in a single theater. He has to look at what is necessary to advance our goal of defeating al-Qaeda globally. That’s a clearly very important theater. We’re going to do what is necessary to accomplish our goal in Afghanistan, but we’re not going to do it without having taken stock, without going through a comprehensive and responsible assessment where all voices are heard and the president makes a judgment. There’s no decision more serious, David, than putting more Americans into harm’s way. The president will do what is necessary to keep America safe.

MS. RICE: But he’s going to do it after a thoughtful and thorough analysis.

GREGORY: General McChrystal said this, speaking to military specialists in London about the difference in views in the national security team about whether you go in with kind of a lighter footprint, without committing more forces, just focus on counterterrorism. This is what he said earlier this week.

GEN. STANLEY McCHRYSTAL: You have to navigate from where you are, not from where you wish you were. A strategy that does not leave Afghanistan in a stable position is probably a short-sighted strategy.

GREGORY: Is the president committed to at least not leaving Afghanistan unless it is stable?

MS. RICE: The president is committed to doing what is essential to keep America safe. And obviously we have made important and substantial investments in Afghanistan. We are not talk–nobody’s talking about walking away from Afghanistan.

GREGORY: No, but will the president stay in Afghanistan as long–until it is stable?

MS. RICE: The, the president will do what is necessary to keep America safe. And that relates not only to Afghanistan, but Pakistan, where we face a very serious…

GREGORY: But you won’t commit to staying in Afghanistan until it’s stable?

MS. RICE: We’ll, we’ll commit to staying in Afghanistan as long as it takes to keep America safe, David. We have challenges and threats…

GREGORY: But those could be two different things, right?

MS. RICE: They have–there are challenges and threats that face the United States that come from multiple quarters.

GREGORY: Right. But you can see, those, those could be two different things.

MS. RICE: They may or may not be two different things. I’m not going to prejudge the outcome of this review. It’s a very important step that needs to be taken to ensure that we are not just reacting and operating on autopilot. The president’s responsibility to the American people is to look at circumstances as they evolve, to make a judgment about what is necessary in the current circumstances to ensure that we are doing all that we can to prevent al-Qaeda from being in a position to attack us, whether in–from Afghanistan, Pakistan, Somalia, Southeast Asia or any of the other places where we have been active and on the offensive against al-Qaeda.

GREGORY: Is the, the political pressure from the left not to escalate in the war a big factor for the president?

MS. RICE: Absolutely not. This is a president who is going to do what is necessary, irrespective of politics, to protect the American people.