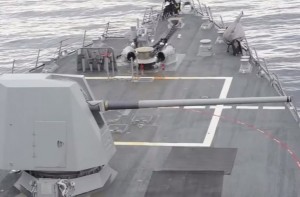 A British tabloid made an embarrassing error Friday, writing a hysterical piece that incorrectly reported the Defence Ministry had paid hundreds of millions of pounds to buy a five-inch-long gun.

“We just blew £183m on a five inch gun, but it’s ‘a good value for taxpayers,'” read the outraged headline from The Daily Star. The subheadline also reinforced that the author believed the gun was literally five inches, calling it “the length of a toothbrush.”

The only problem? Five-inch guns are named after their caliber, not their length. They shoot munitions that are five inches in diameter, meaning the guns themselves are necessarily huge.

The piece quickly attracted the mockery of those who were more familiar with military terminology.

Yes, the @Daily_Star has printed this. They seem to have confused the calibre of a new gun with the length of it… pic.twitter.com/76YXdpeJ52

This is amazing. The Star thinks a five-“inch gun is literally five inches long. pic.twitter.com/Uv2BFnlfc3

Um, I’m not sure this is how gun measurement works, Daily Star: https://t.co/hs7CTm1eW1

The article has since been corrected, and now reads as a sort of mundane examination of a fairly routine naval purchase.