Ted Cruz Breaks Rank With Rubio and Rand, Is Against Pathway To Citizenship
audio

Ted Cruz Breaks Rank With Rubio and Rand, Is Against Pathway To Citizenship 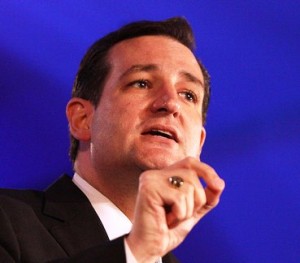 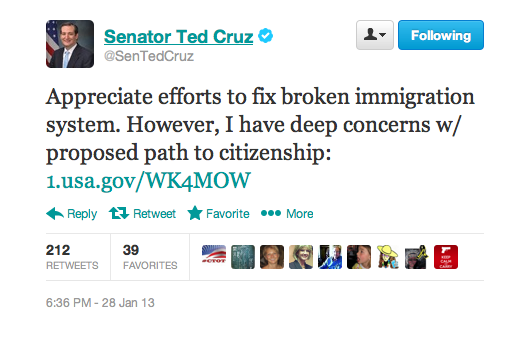 “The part that I’ve got deep concerns about is any path to citizenship for those who are here illegally. I think that is profoundly unfair to the millions of legal immigrants who have followed the rule, who’ve waited in line.”

But the remainder of the interview entailed Cruz coming out against the proposed measures, much more strongly than he has previously and, in doing so, firmly breaking rank with Senators Rubio and Paul.

“The American people have learned before that when politicians promise to secure the border — everytime it’s been said in the past, it hasn’t happened. So I think most voters share the skepticism I have of empty promises and hot air.”

Second, when asked what immigration reform plan, if any, he would support, there was no mention of legal status, much less citizenship, for illegal immigrants:

“I think the two critical elements are, number one: getting serious about securing the border: tripling the border patrol, providing technology, providing helicopters with infrared, providing the tools to drop illegal immigration and to solve the problem. And then number two: I think there are positive reforms to legal immigration — to make it easier to deal with, the lose [?] the paperwork, the burden, the waiting periods — that would receive overwhelming bipartisan support…. I think the best place to start at immigration [reform] is where there’s wide agreement. President Obama doesn’t want to do that. He wants to pick a path to citizenship precisely because he knows that it’s a partisan, divisive issue and he holds everything else hostage to that wedge issue.”

Third, and most interesting of all, when asked if he supports a path to a green card, assuming the border was secure, Cruz indicated he is not only skeptical of granting illegal immigrants citizenship but also even of a green card, explaining:

“Well, the problem with the green card is a green card is a permanent legal residence status and anyone who has a green card is eligible for citizenship within five years. So if someone can get a green card, that is a path to citizenship. And it worries me — even if someone goes to the back of the line, what it means is that if you’re somebody in another country who wants to come to the United States and you followed the rules — you applied to come legally — if we pass something that alows those here illegally to achieve citizenship it means you’re a chump for having stayed in your own country and followed the rules because you were not able to live here [in the meantime] and raise your family and enjoy the tremendous blessings and liberty in the United States simply because you followed the rules. And I think we need to uphold the rule of law and we need to be fair to legal immigrants. Legal immigrants get left behind in a lot of these discussions.”

Senator Cruz does make a key point in emphasizing that granting a green card, provided that citizenship requirements are ultimately met, is essentially granting a pathway to citizenship. While Senators Rubio and Paul stress there is no ‘special treatment’ or ‘special pathway’ to citizenship, Cruz combats that argument by noting that an illegal immigrant would be able to stay in the United States during the years-long application period, whereas applicants abroad are not afforded the same opportunity.

Senator Cruz’s positions also seem to be more in line with those of his fellow Republicans, than are Rubio’s or Paul’s. Last week’s Pew poll, for instance, indicated that only 38% of Republicans (and only 43% of the general public) favor a pathway to citizenship.

See below for audio of Senator Cruz’s appearance on the Sean Hannity Show:

[All emphasis in bold is this article’s author’s.]