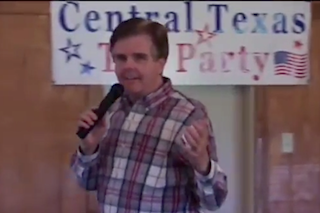 Texas Republican State Senator Dan Patrick does not think the federal government should be spending any money to fight climate change and to emphasize his point he recently declared that President Barack Obama “thinks he’s God.” Patrick, who is running for lieutenant governor in Texas, made his remarks at a debate Tuesday evening in Salado, Texas.

After an audience members asked the candidate what he thinks of Obama’s plan to spend $1.2 billion in an attempt to cool global temperatures by one degree, Patrick replied, “I understand why Obama thinks he can change the weather — because he thinks he’s God.”

“He thinks he is the smartest person in the country,” Patrick continued. “He thinks he knows better in Washington what we do in Texas. He thinks he’s the one, through all of his executive orders, that Congress isn’t even up to his level, so I’m not surprised that he also thinks he can change the weather.”

Patrick characterized the “debate” over climate change as being more or less tied between those who believe in man-made climate change and those who don’t (instead of the more than 97% of scientists who believe it is happening). “But you know, if you want a tiebreaker,” he said, “if Al Gore thinks it’s right, you know it’s wrong.”

“Climate change — if you let the Democrats and the liberals enact their programs, it will destroy jobs in this country and it will destroy our economy,” Patrick concluded. “I’ll leave it in the hands of God. He’s handled our climate pretty well for a long time.”

Watch video below, as flagged by Raw Story: