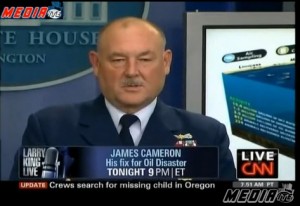 Filmmaker James Cameron has been all over the TV talking about how he has been denied access to film the BP Oil Spill, despite the fact that the only images of the leak that are currently available are “crime scene video done by the criminal.” At today’s White House briefing, I took Cameron’s case directly to National Incident Commander Admiral Thad Allen, asking him if having documentation from a source other than BP might be worth a little risk.

Tommy Christopher:    All right. First, you said over the weekend on “This Week” that you’ve issued an order that journalists are to have unfettered access to the disaster sites. What I want to know is, what’s going to happen — what are you going to do to BP for preventing journalists from getting access to these sites both prior to now and going forward?

ADMIRAL ALLEN: Well, if we have to we can issue an administrative order from the federal on-scene coordinator. If they violate that, there’s civil and criminal statutes associated with it. But we haven’t issued an order like that. I put out a general guidance that there are only two reasons that media should be prohibited from an area — if it’s a security reason or a safety reason because of personal protective equipment. Other than that, we are putting no restrictions on access.

Now, we can’t tell somebody to talk to somebody if they don’t want to. But my policy is, unless it’s a security or safety reason, there is no restriction on access.

Tommy Christopher: Is that system nimble enough? I mean, if BP calculates that keeping journalists away from oily birds is more viable than whatever your penalty is going to be down the road —

ADMIRAL ALLEN: Well, I guess somebody would have to give me the specifics of an incident and we’ll go take a look at it.

Tommy Christopher: If I want to take a picture of an oily bird and they told me to go away —

ADMIRAL ALLEN: Well, it’s hypothetical. If you give me the facts, I’ll react to them and tell you what we would do or can do.

Savannah Guthrie:    BP employees seem to be under the impression they can’t talk, if you talk to them down there — they’re not permitted.

ADMIRAL ALLEN: Well, we’ll follow up with — I’ll have a call with Tony Hayward.

I asked about penalties for this sort of thing a few weeks ago, and nobody knew then, either. Admiral Allen seems entirely too confident that he won’t be needing them.