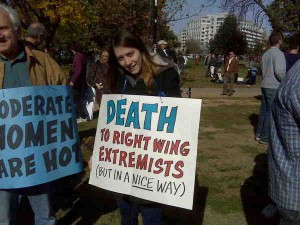 Saturday’s Rally to Restore Sanity and/or Fear was barely even over when some conservatives on Twitter began clamoring for stories about offensive signs at the rally, which only seems fair given the attention paid to offensive Tea Party signs. However, like comparing Restore Sanity‘s Funniest Signs with the funny (for a different reason) Tea Party signs, it only seems fair.

Still, there were a few signs that drew outrage (faux and otherwise), and one that would have if I’d been able to get a shot of it. After an exhaustive search, here are the Most Offensive Signs at the Rally to Restore Sanity and/or Fear.

Overwhelmingly, the signs at the rally were along the same lines as the Funniest Signs, only less funny. If we were to do a “Most Smug Rally to Restore Sanity Signs,” we would break the damn internet.

There were very few truly offensive signs, though. Believe me, I was looking. Even conservatives I spoke to at the rally (yes, there were a few) thought that most of the signs were funny, and only mentioned one sign that put them off (the one pictured above, photo by Kevin Eder).

I even put out a call to conservatives on Twitter for outrageous signs, but so far, I’ve only gotten these two.

In fact, the number one satirical target of the rallygoers (just ahead of Fox News) was the Tea Party, yet there were shockingly few “Teabagger” references.

There was one sign that would have garnered a Drudge link, for sure. As I left the rally in a crush of hipster humanity, I saw a sign that pictured Christine O’Donnell, and which said “Burn the Witch!”

Unfortunately, I wasn’t able to photograph it, as I was carried away from it by the sea of departing rallygoers.

The folks I spoke with at the rally have the right attitude. By demanding that the lamestream media cover offensive rally signs, the “everybody gets a trophy” brand of fairness, all you’re doing is reinforcing the original narrative.

Having said all of that, there were a few signs that were legitimately offensive, and some whose offensiveness depends on the eye of the beholder. Here are the 23 Most Offensive Signs at the Rally to Restore Sanity and/or Fear.