The Case For Droning Julian Assange 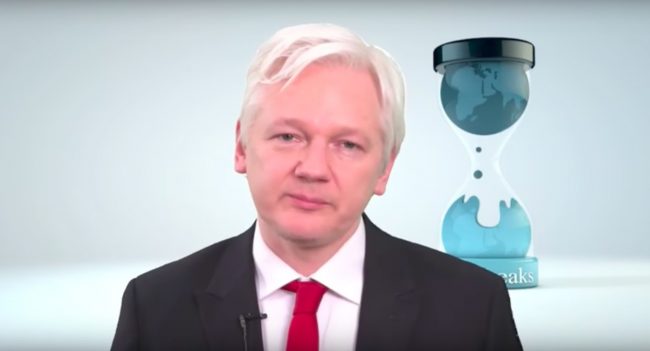 After a very long period of mollycoddling, the Trump administration appears to finally be getting tough with Wikileaks. During a press conference in April, Attorney General Jeff Sessions said that he was looking for ways to arrest and prosecute its mercurial leader, Julian Assange. That same month, CIA Director Mike Pompeo denounced the organization as a “hostile intelligence service,” but added that the problem of Wikileaks and Assange offered no “quick fix.”

With all due respect to the estimable CIA Director, I would proffer there is a quick fix.

We can drone Julian Assange.

In a controlled targeted strike, the United States can blow up the Ecuadorian embassy in London, where he currently resides, and put an end to Mr. Assange and Wikileaks.

Now hear me out; I don’t use the “D-word” lightly. The fact is, Mr. Assange is no ordinary hacker, fleecing little old ladies or snatching R&D from Microsoft. He is a nefarious actor on the world stage. His disclosures have directly aided and abetted America’s international adversaries from Russia to ISIS, and his leaks have unquestionably made Americans and many others less safe around the world. Assange’s actions are not hacking, they are cyberterrorism — and they should be dealt with thusly.

Assange should be given an ultimatum, say 48 hours, to surrender to British authorities, or face a drone strike.

“If you accept the premise that drone attacks are appropriate in some situations where it is impossible to apprehend suspected terrorists, then a proposed drone attack against Assange seems permissible,” Robert Precht, a former public defender told Mediaite. “Giving the option of surrendering or being attacked actually seems generous.”

It’s a subject on which Precht is uniquely qualified to opine. In 1993 he served as the defense attorney for World Trade Center bomber Mohammad Salameh, which he later recounted in his book, Defending Mohammad.

It takes only a cursory look at Assange’s record to see how Precht came to his conclusion.

Back in 2010, Wikileaks released a cable listing numerous sensitive sites around the world. As the New York Times reported at the time, the listing was a potential goldmine for terrorists looking to launch attacks against U.S. interests and personnel. Then-British Foreign Secretary William Hague called the leak “particularly reprehensible,” adding to BBC Radio that, “there is great concern, of course, about disclosing a list of targets that could be of use to terrorists or saboteurs.”

Just a year later, another document dump from Wikileaks released the names of thousands of individuals whose inclusion in secret U.S. cables stood to put them in immense personal danger. Many of them were activists and fellow whistleblowers like Assange himself. Publishing the files without the redactions served no public interest.

“We deplore the decision of WikiLeaks to publish the unredacted state department cables, which may put sources at risk,” read a joint statement issued by Assange’s then-media partners, The New York Times, El Pais, Le Monde, Der Spiegel and the Guardian which reported the news.

Diplomats, governments, human rights charities and media organizations had urged WikiLeaks’s founder, Assange, not to publish the full cache of cables without careful source protection … WikiLeaks has published its full archive in an easily accessible and searchable manner, the first time the content has been made widely available to those without sophisticated technical skills.

It wasn’t a one-off either. Wikileaks has continued its practice of recklessly releasing unredacted names, with a fresh example in just March of this year.

“To me, the fact that he released documents identifying vulnerable targets of terrorism is damning,” said Precht.

The amazing thing about droning Julian Assange is that, once one accepts the premise that he is drone-worthy, the elegance and humanity of that option becomes readily apparent.

The British, which the BBC estimates have spent £12,000,000 on Assange related security costs, would likely be happy enough for any solution that gets rid of him. And since there is no risk of Assange escaping, negotiations between the U.S. and Ecuador could take place with full transparency with zero risk for miscommunication.

If a credible threat of drone strike were calmly issued to the Ecuadorians, they would almost certainly eject Assange, negating the need for it in the first place. On the odd chance they refused, a date for droning could be set and publicly announced, giving Embassy staff ample time to evacuate themselves from the area. London’s finest, meanwhile, could ensure the zone was completely cordoned off from civilians.

At the risk of being trite — it would be like droning fish in a barrel.