The Digital Era: Information Is Worth More Than The Paper It’s Printed On

The Digital Era: Information Is Worth More Than The Paper It’s Printed On 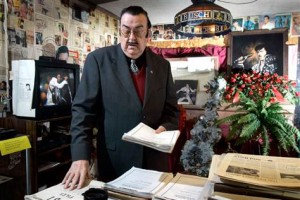 On Interstate 70 west of Saint Louis (a dull stretch), there used to be something called “The Elvis is Alive Museum.” It was founded at some point in the late ’80s or early ’90s by Bill Beeny, an accountant and Elvis impersonator. Its simple premise: Elvis is still alive and we have the evidence that proves it.

Of course, it didn’t. I went twice before Beeny shut the museum down and threw its entire contents on eBay. The first time I went, the museum was housed in a series of conjoined trailer homes, so cramped that the gift shop was located in a bowling alley a little bit down the highway. On my second visit, it had been moved to a small house, allowing a front room that sold souvenirs: generic cheap Elvis trinkets, a few mugs with lackadaisically applied Elvis stickers. And to the side, under glass, a copy of Elvis’ complete FBI file, some 600 pages, for sale at the discount price of a few thousand dollars.

To Mr. Beeny, the heft of that pile of documents implied value. This was before everyone had a printer; the stack was presumably a photocopy generated by the FBI in Washington, acquired by Mr. Beeny at no small effort. Or maybe it was a generation newer than that, run off at a Kinko’s. Point is: it was big, not everyone had it, and it contained information.

I was reminded of this today when reading Alexis Madrigal‘s great piece about his visit to a now-abandoned satellite receiver in central California. It’s a damp, aging region, well-stocked with giant trees, once home to a critical piece of the American space program. There, Madrigal runs into Eric Lancaster.

He’d told me that he had “some real documentation of Apollo trips. Notes, signatures, serious dated stuff.” Lancaster hinted that the documents might be very valuable, and they were certainly the kind of thing I was looking for. He hadn’t scanned anything and didn’t use the Internet, so we arranged a meeting and my fiancee and I drove to Cachagua….

Next to a small backpack, on top of a plastic chair, there was a stack of mildewed manila folders held together by rusting metal clips.

“I was thinking that we might be able to make a few bucks, maybe even sell these to you guys,” Lancaster said.

To Lancaster, the documents themselves had value. Ostensibly for their contents, but really the pieces of paper themselves. They were something tangible, a good for which currency could be exchanged. Those folders had been in his house since he’d picked them out of the detritus of the satellite receiver offices. They were a thing that meant something to someone – and now that someone, it seemed, was standing in front of him.

It’s not just newspapers that confer value on medium instead of message. While not as valuable as in pre-Gutenberg days, we still put a premium on the physical conveyance of words and ideas: gorgeous books (see: Franzen, Jonathan), slick magazines, important newspaper editions. Part of it is aesthetics, of course, but a larger part is that the physical item is a metaphor for its contents. A manila envelope handed to Woodward and Bernstein in a parking garage – that totem carries with it a depth of meaning and poetry. If Deep Throat could have avoided the meeting, could have sent the information to Julian Assange, he would have. But then what goes in the museum?

Elvis’ entire FBI file is now available online. The value of Beeny’s stack, if it has survived being in storage after its eBay sale, is whatever a recycler will take for it.