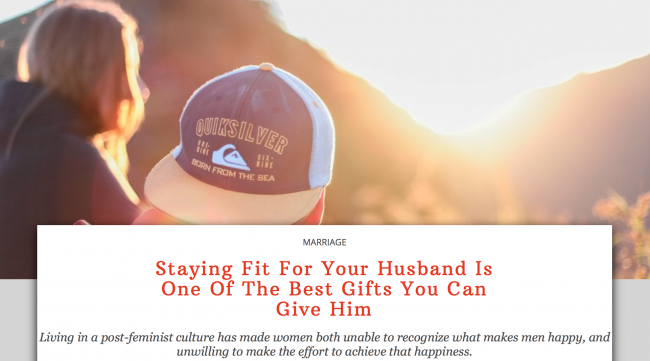 Every now and then, women may find themselves wondering how to make men happy — that is, before snapping back to reality and recalling that actually, we aren’t living in the 1800s and pleasing men isn’t our job, sole purpose, or really even our concern.

In an article last week that, for whatever reason, The Federalist actually thought would be a good idea to run, the publication suggests that “living in a post-feminist culture has made women both unable to recognize what makes men happy, and unwilling to make the effort to achieve that happiness.”

First and foremost, it may be that this line is supposed to be an insult to women and feminism, but if you think about it, it’s really just insulting to men by suggesting they’re small-minded enough to not be attracted to a woman unless she dedicates her whole life to trying to please them.

Surely men deserve more credit than that? And surely in the 21st century we’re not suggesting that if a woman dares to believe men and women are equal and deserving of the same rights, respect, and privileges, therefore she must be undesirable?

Believe it or not, at this point, Inez Feltscher is just getting started in her bizarre feminist takedown piece entitled “Staying Fit For Your Husband Is One Of The Best Gifts You Can Give Him.”

Her main point is that by telling women “hey, contrary to centuries-old patriarchal narratives, your body actually doesn’t belong to your male partner and you can do what you want with it,” feminism is ruining marriages — women have to conform to patriarchal standards of attractiveness to be loved and respected by their husbands, Feltscher says.

Additionally, according to Feltscher, predictably enough, the need for attractiveness in a spouse only goes one way:

“The unspeakable truth is this: a spouse’s physical appearance is much more likely to be important to men than women. Maintaining their figures and beauty — through reasonable efforts—is one important way that women can make their husbands happy.”

“Honoring your husband’s masculine nature — and the desires that come with it — is one of the best gifts you can give the man you love,” she concludes.

Feltscher’s idea, that women have some sort of duty to conform to traditional standards for female attractiveness and sexually satisfy their husbands, but that, of course, this doesn’t go both ways, sounds outlandish.

But the sad reality is that it’s not too different from what women are hearing everywhere else. It’s relatively rare that the sex advice women find in women’s magazines is aimed at helping them receive pleasure rather than the other way around, just as it’s rare that women are encouraged to be healthy and take charge of their fitness, for their own sakes, rather than to attract the desire of men.

After all, wasn’t it just in 2015 that then-Republican presidential candidate Donald Trump suggested Hillary Clinton wasn’t qualified to be the president of the United States because she “can’t satisfy her husband”?

Hey @realDonaldTrump – In case you're looking for that tweet you deleted .. I got it right here. pic.twitter.com/a6F98q5xGU

Clearly, Feltscher isn’t the first person on the right to suggest the measure of a woman’s worth is whether or not she can “satisfy her husband,” and given conservatives’ unhealthy obsession with policing and legislating women’s bodies, I doubt she’ll be the last.