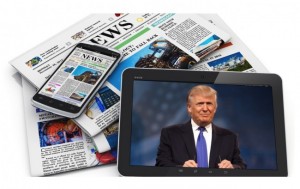 There’s been a lot of ink, virtual and otherwise, spilled over the media’s treatment of the Donald Trump Reality Show and Presidential Campaign Extravaganza, but over the past twenty-four hours, the excrement has become tangible in ways that it heretofore has not been. Whatever your politics, if you have ears, you know what Donald Trump meant when he said that “Second Amendment people” could do something about Hillary Clinton‘s judicial appointments if she wins, and whether you view the comment as an incitement or a mere observation, it was a reckless and dangerous thing to say.

According to many in our news media, however, there are two sides to this story, a problem that Morning Joe regular Mike Barnicle brilliantly put his finger on during Wednesday morning’s broadcast:

What Barnicle identifies as “bending over backwards to try to be objective about what Trump said” is really a flawed form of neutrality that insists there must be two sides to every story, and that even the most absurd argument should be given equal weight with what should be identifiable as the objective truth. On Tuesday night’s The Rachel Maddow Show, for example, fill-in host Steve Kornacki very capably explained why the meaning of Trump’s words was plain, and how his campaign’s explanation could not possibly be true, but then spent several minutes arguing against his own point.

On the other hand, when a journalist states the obvious, as Don Lemon did when he called out a Trump supporter Tuesday night, he is immediately accused of bias. While doing his job as a responsible journalist, Lemon held a Republican congressional candidate accountable on his show, questioning the guest’s ability to defend Trump’s much-debated second amendment gaffe.

In response, Lemon found himself on the receiving end of a bullying effort by the Republican candidate himself the next morning with a derogatory comment on social media:

.@dbongino You were fantastic in defending both the Second Amendment and me last night on @CNN. Don Lemon is a lightweight – dumb as a rock

The only way to stop a bully is to punch back. When Trump acts of out line, it is the moral and journalistic responsibility of the media to dig in harder, even in the face of nasty responses.

Journalists only inoculate themselves through contortions like Kornacki’s. Telling your viewers that “some say” the sky is not blue, however, is not actually “objectivity,” and while this tendency is ordinarily just deleterious to the public good, it is downright dangerous in this case.

Complicity in the irresponsible talk that Trump has engaged in will only encourage more of it (as if he needed that), and embolden his “intensely rabid following.” The media has already shown it has no stomach to ignore Trump, so if they’re going to broadcast his reckless and dangerous talk, they must at least properly identify it.