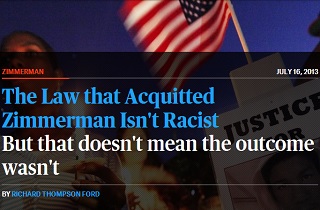 Under pressure from critics, The New Republic has finally completely corrected a line in a piece of commentary by by Stanford law professor Richard Thompson Ford, but a glaring error remains. Now that we’ve established that George Zimmerman called the police 46 times in eight years, not 911, and not over the course of 15 months, someone should probably examine the claim that Ford makes in his headline, “The Law that Acquitted Zimmerman Isn’t Racist But that doesn’t mean the outcome wasn’t.”

Conservatives jumped all over The New Republic for attacking their new hero as “an edgy basket case with a gun who had called 911 46 times in 15 months, once to report the suspicious activities of a seven year old black boy,” when in reality, he had called the cops 46 times in total, and was only concerned for the safety of the young black boy, because that’s what people do when they think a kid is about to get hit by a car, they call the non-emergency police number, and stay in their cars to avoid danger.

The New Republic was slow to correct the errors, and only did so in stages. Here’s how that passage reads now, and the correction at the end of the piece:

By contrast, Zimmerman was an edgy basket case with a gun who had called the police 46 times in about eight years.

…This article has been corrected. Zimmerman called various law enforcement officials 46 times, not just 911, as originally stated. He made the calls over an eight-year period, not over the course of 15 months, as originally stated. The original sentence also cited a call Zimmerman made about a seven-year-old boy; the clause has been removed as it implied that Zimmerman was reporting suspicious activity. It appears that Zimmerman made the call out of concern. We regret the errors.

The errors were silly, because the exaggerations didn’t add much to the point Ford was trying to make. Most people probably haven’t called the police more than six times in their lives, let alone 46, and I’m not sure how it undermines Ford’s point that Zimmerman had the non-emergency operator on speed-dial, rather than calling 911. He could have as easily linked to the call logs, and let readers draw the conclusion he gives them by calling Zimmerman a basket case. Who sees a neighbor’s garage door open, and calls the cops instead of going, “Hey, neighbor, your garage door is open!” Who does that five times?

Ford’s point wasn’t even that Zimmerman was racist, but rather, that he had an overactive Spidey sense that had him calling the cops about women yelling at old people, and marauding caterers. He didn’t need to make those leaps, and could have corrected them quickly without much fuss. Like most of the mainstream media, Ford also ignored the far more compelling contents of Zimmeerman’s MySpace page, in which he laments getting “knifes” pulled on him “by every Mexican you run into.”

By repeating, and then refusing to correct, falsehoods, Ford completely undermined his entire piece, which is actually a good thing. Ford’s central point, despite being published in a liberal space, is what underpins the inertia among a majority of whites (mostly conservative) to do anything about racism. Besides that headline, here’s how Ford sums up the flaw in his thesis:

Zimmerman was legally entitled to patrol his neighborhood with a gun because getting a concealed weapons license is Florida is easy: More than 900,000 people are licensed to carry concealed weapons there. And Florida’s stand your ground law all but endorses vigilantism, allowing private citizens to take the law into their own hands rather than call the police. None of these laws are racially discriminatory, but because racism is still prevalent in our society, it’s likely that the vigilantism they inspire disproportionately harms blacks.

This premise, that a law can have racially discriminatory effects without being racist, carries with it the implication that we can’t fix the law without fixing racism. The laws are fine, it’s racism that’s the problem. What Ford fails to recognize, at least in this commentary, is that protecting a status quo that has racist effects, that failing to make corrections that mitigate them, is itself racist. Any law that fails to single out black people could be defended in this way, and they are. Ford’s idea of “colorblind” law works out well for conservatives who assail black voting rights, and then suggest it is unjust to single black people out for protection.

Conservatives have a right to be annoyed with The New Republic over its handling of their factual errors, but liberals shouldn’t reflexively rush to defend a piece that wasn’t improved in the slightest by those corrections.