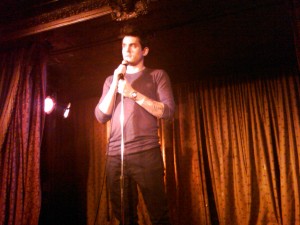 John Mayer walks into a comedy club…sounds like the (lazy) setup to an article about the novelty of John Mayer doing comedy. But actually, Mayer is well-known in certain circles for trying his hand at the open mic now and again, when he gets tired of making girls swoon the old-fashioned way. For example, Stereogum covered a foray into standup back in 2006 when he made a less-than-dazzling impression at the Comedy Cellar.

That’s why I wasn’t surprised to see Mayer hop onstage at the Slipper Room for the comedy show “Sweet” hosted by Seth Herzog last week — but why I was surprised to see him play the victim in his interview with Sean McCarthy at The Comic’s Comic. Mayer, who got onstage at the last minute and gamely did a set unprepared, nonetheless did a set unprepared, which means a lot of pauses and awkward moments, which he accepted and handled pretty well, and which the crowd was prepared to be patient through. There were a few good jokes (I was one of the few olds who laughed at the Diffr’ent Strokes riff) and a few not so good jokes (eh, we get it, you have sex with hot chicks) but he was a good sport about it, mostly, and it was fine.

It was a little less fine after he finished and the very-popular-in-the-comedy-world-poised-for-breakout Kumail Nanjiani went onstage with stuff he did plan, made a few jokes about whoa, was that just John Mayer? which is pretty de rigeur, and suddenly Mayer jumped back onstage and just like that, they were a very, very, very awkward duo. One was an amateur, one was a pro, and it showed — just as it would have showed had Kumail jumped on stage during a concert and tried to cut into Mayer’s guitar solo. (To be fair, it happened after a little back and forth between them so it wasn’t out of the blue.)

I was there. I saw it. Which is why at this part of McCarthy’s interview I really wanted to smack John Mayer:

“It was combative in the sense that the crowd didn’t really accept the fact that the jock, the guy who gets the girls, was at a place where the guys go who talk about how they don’t get the girls.”

Oh GOD. Really? So everyone in the big bad audience was mean to you because you’re so much cooler and hotter and prettier and famouser than them? Here’s a fact about Sweet: It is one of the friendliest places to do comedy, ever, and plenty of celebs drop by with no complaint (Janeane Garofalo, Paul Rudd, Justin Long to name a few). Seth Herzog is one of the more cuddly comedians on the scene, beloved by his peers and the audience that fills his show week after week for often over 2 hours (and that is a long time for comedy). I’ve seen Seth Herzog be mean only to hecklers, and then only after they’ve way overstayed their welcome. He brings his MOM onstage every week. Like, come on. 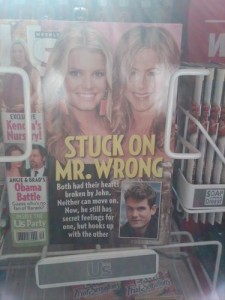 As someone who was IN the audience (front row!) I can tell you two things: First, the audience was excited to have Mayer, and second, we were rooting for him. But he didn’t come up with a tightly-planned set filled with jokes he’d sweated over writing at 4 a.m. He had a few bits that you could tell he’d done before, but there was a lot of “Soooo….what’s up?” time. Nonetheless, the crowd was polite, with just one heckler – the same drunk girl who Seth had shot the death-stare on stage with his mom – and a total willingness to laugh with Mayer, not at him. He made a lot of jokes about women, and how Us Weekly had guaranteed that he wouldn’t get laid again (he referred to the cover to the right, which I now much, much better understand) and mimed having sexual relations with his wineglass, and joked about how a dick didn’t remember all the fine ladies it had met, it only knew that it wanted to meet more (but in less delicate language). Charming, but whatever.

Less ‘whatever’ is the whole “John Mayer Is Racist” thing. Mayer is now getting flack for hassling Kumail (who handled the whole thing beautifully by the way) because he didn’t know his name and jokingly said, “Kabul?” Ha, ha. Kumail retorted: “Is John Mayer busting my balls in a vaguely racist way right now?” Yes, yes he was. He also made a cringey joke about how Kumail had an English accent (according to Mark Graham at Vulture, Kumail quoted him as saying he “looked like a brown guy but sounded like a white guy”). Now he has apparently been dubbed an “Accidental Racist” by Eugene Mirman. As someone who was in the audience, neither Kumail nor the audience nor Herzog (who we were sitting near) nor anyone afterward seemed to pick up this “racist” thread. It was more the “awkward” thread and the “why did he go back up onstage” thread and “wow, 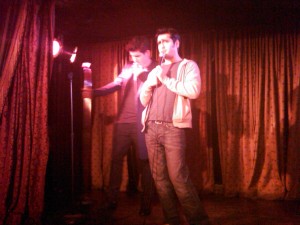 that was pretty effing weird” thread. But that was it, and folks, this is a comedy club, envelopes do get pushed a little here and there. Given the context of the evening, it was more that Mayer was guilty of misreading the crowd (NB: I have discussed this with a few people who were there, including a person of color, and that was the consensus).

Incidentally, Graham reports that Mayer “was quick to get in touch with Sean McCarthy” which he was, but to be clear he did so before Nanjiani’s subsequent retelling of the tale — another reason that I was so unimpressed with Mayer. Mayer obviously knew he bombed and was looking to deflect responsibility for that. Dude. You saw the other people on that stage that night, who were pros. When you’re not a pro, you gotta prepare. You didn’t. End of story — and could have been, had your ego not propelled you onstage to tussle with Nanjiani, who you should have realized was the headliner, and the guy meant to go after you to pick up the pieces just in case. Dumbass.

One more thing: Kumail Nanjiani is not some loser who can’t get a date. After Mayer left the stage, most of his bit was about how he just got married. Which means he’s probably getting laid more than John Mayer. Just sayin’.

Anyhow, while I will continue to kick myself for my blackberry’s Twitter freeze-up (all I managed was to opine on Mayer’s large feet before that was it), I did snap some quick photos of the event, which I think actually captures the awkwardness between Mayer and Nanjiani — but also caught them shaking hands after the set. And by the way, afterward Mayer hung out chatting with people, cutting a weirdly tall figure in a black trenchcoat, and then, according to Twitter, headed up to the Comedy Cellar to try again. So. No story came out of that so maybe he learned something.

Update: Here’s the report from that one. Good God, he learned nothing. Sheesh.

Photos of Mayer, Nanjiani, Herzog and his mom below. McCarthy’s interview is here and Graham’s write-up at Vulture is here. 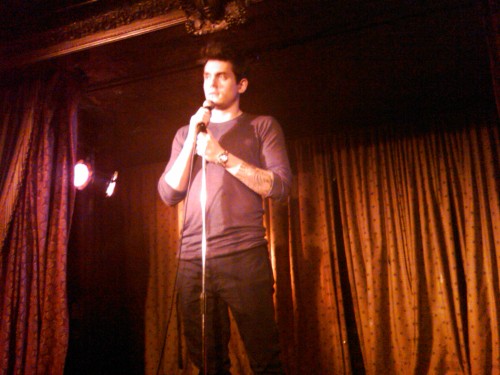 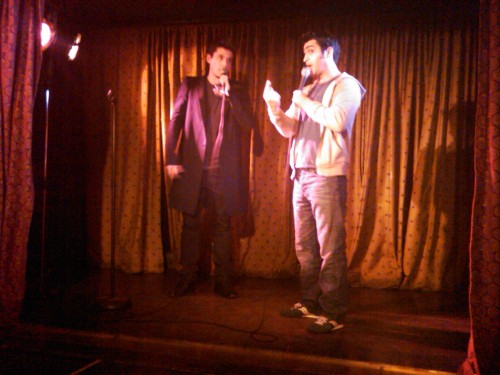 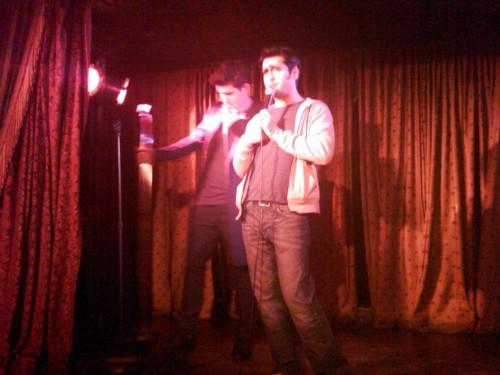 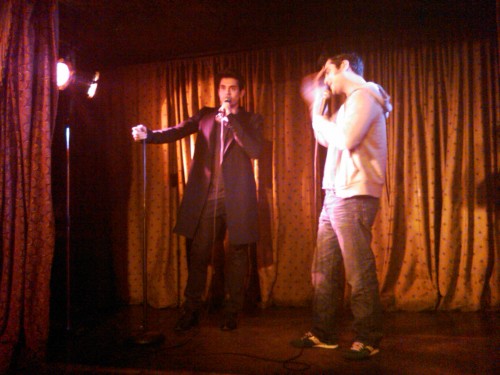 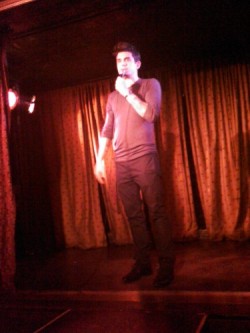 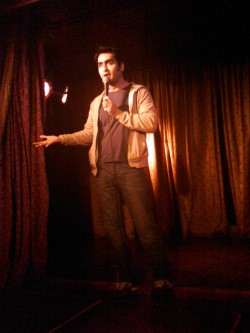 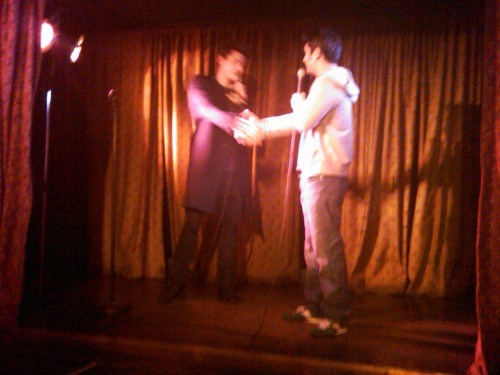 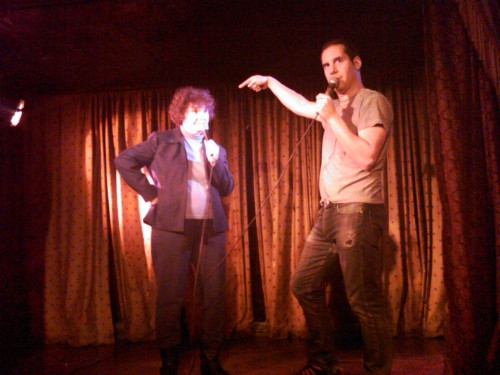 Oh, disclaimer: I know Herzog and was in a show with him on Monday, which is one of the reasons I didn’t get to this earlier – unlike Mayer, as a non-comedy pro I was petrified so I was spending most of my time actually, you know, preparing. Oh, snap.