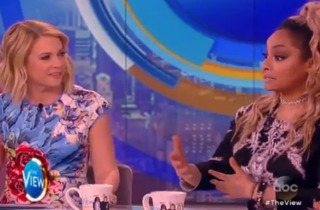 Christmas came early for the crew here at Mediaite because watching this unfold in real time was better than any present.

What could go wrong, really?

That’s when the train went off the tracks. Behar joked that the association with church made her unwilling to say “Oh, God!” in bed and Faris countered that she can still get on her knees. What even is this show?

Donald Trump is wrong about this show; it’s a true cable gem.