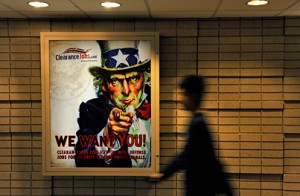 Today, the Washington Post unveiled Top Secret America — the culmination of a two-year investigation into the United States’ post-9/11 intelligence. Referring to it as a fourth branch of government, the Post reveals some interesting findings about the “hidden world, growing beyond control.”

The report, led by reporters Dana Priest and William H. Arkin,  gets right to the point at the very beginning:

The top-secret world the government created in response to the terrorist attacks of Sept. 11, 2001, has become so large, so unwieldy and so secretive that no one knows how much money it costs, how many people it employs, how many programs exist within it or exactly how many agencies do the same work.

The investigation’s conclusion is clear: the effectiveness of this massive national security buildup cannot be determined. The whole network is simply too large and complex. How large? Here are a few of the figures:

Some 1,271 government organizations and 1,931 private companies work on programs related to counterterrorism, homeland security and intelligence in about 10,000 locations across the United States.

In Washington and the surrounding area, 33 building complexes for top-secret intelligence work are under construction or have been built since September 2001. Together they occupy the equivalent of almost three Pentagons or 22 U.S. Capitol buildings – about 17 million square feet of space.

Yes, intelligence operations are inherently secretive. But Priest and Arkin explain why this particular network is dangerous, and point out its inefficiences:

Many security and intelligence agencies do the same work, creating redundancy and waste.

Analysts who make sense of documents and conversations obtained by foreign and domestic spying share their judgment by publishing 50,000 intelligence reports each year – a volume so large that many are routinely ignored.

These are not academic issues; lack of focus, not lack of resources, was at the heart of the Fort Hood shooting that left 13 dead, as well as the Christmas Day bomb attempt thwarted not by the thousands of analysts employed to find lone terrorists but by an alert airline passenger who saw smoke coming from his seatmate.

Furthermore, many people involved in the system have concerns:

“There has been so much growth since 9/11 that getting your arms around that – not just for the DNI [Director of National Intelligence], but for any individual, for the director of the CIA, for the secretary of defense – is a challenge,” Defense Secretary Robert M. Gates said in an interview with The Post last week.

“I’m not aware of any agency with the authority, responsibility or a process in place to coordinate all these interagency and commercial activities,” he said in an interview. “The complexity of this system defies description.”

The result, he added, is that it’s impossible to tell whether the country is safer because of all this spending and all these activities. “Because it lacks a synchronizing process, it inevitably results in message dissonance, reduced effectiveness and waste,” Vines said. “We consequently can’t effectively assess whether it is making us more safe.”

That’s right. After all the money and resources spent on creating such a complex network, even those involved in its work cannot determine whether it is keeping Americans any safer (which is, of course, the main objective of it all).

The entire report is compiled into a package complete with an introductory video, articles, maps and other interactive graphics. It is massive, and the Post deserves kudos for devoting more than a dozen journalists and two years to such a relevant project — especially at a time when many news organizations are cutting back on investigative reporting.

Indeed, the project has gotten much applause, with some saying that this is the kind of work that will save newspapers. Some, however, like Gabriel Schoenfeld of the Weekly Standard, disagree, saying “There is nothing top secret about “Top Secret America” (at least in its first installment). In this respect it is a case of false—and very smart—advertising.”

Faced with the obvious restrictions of classified intelligence, it is not surprising that the report doesn’t drop any bombshells. But to delve through such a large volume of information, conduct so many interviews, and compile it all into an online project in which every data point “is substantiated by at least two public records” is a feat, to say the least. More importantly, it brings an important issue to the public’s attention. Awareness is the first step.

Related: The Washington Post’s Top Secret America: What Does It All Mean? [Geekosystem]