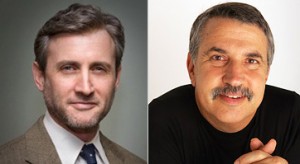 The firing of Octavia Nasr has led to passionate responses from many in the media. Some have viewed the actions of CNN as necessary and obvious while others see it as a vast overreaction in the age of Twitter of YouTube. Tom Friedman fell in the latter camp, writing an op-ed in the NY Times saying as much. This op-ed drew a strongly-worded critique from Mediaite founder Dan Abrams in the comments section of this site.

Earlier today, our own Glynnis MacNicol wrote up Friedman’s piece. She used this quote from the editorial:

I find Nasr’s firing troubling…To begin with, what has gotten into us? One misplaced verb now and within hours you can have a digital lynch mob chasing after you — and your bosses scrambling for cover. A journalist should lose his or her job for misreporting, for misquoting, for fabricating, for plagiarizing, for systemic bias — but not for a message like this one.

What signal are we sending young people? Trim your sails, be politically correct, don’t say anything that will get you flamed by one constituency or another. And if you ever want a job in government, national journalism or as president of Harvard, play it safe and don’t take any intellectual chances that might offend someone. In the age of Google, when everything you say is forever searchable, the future belongs to those who leave no footprints.

Below the post, in the comments, Abrams had this to say about Friedman’s argument:

I totally disagree with Friedman here. You have to make a choice — either journalists can express opinions about the people and subjects they cover or they can’t. I happen to believe that it would be far more honest and enlightening if journalists admitted their biases when they have strong feelings about issues they cover. That would allow the reader to judge what that should mean.

But that is not the way CNN or The New York Times for that matter, operate. They claim that much of their value comes from dispassionate reporting with no bias towards one side or the other. So when a journalist who covers the middle east expresses admiration for the leader of a group that is at least partially a terror organization, its not just a small matter. He may have done other amazing things including being more progressive than others of his ilk, but can you imagine what would happen to an American journalist expressing admiration for an Al Quaeda leader who had other, better, attributes? When you work at a media entity like CNN (or the New York Times) and you don’t get that words matter — all of them– then that in and of itself, should be a fireable offense.

Friedman claims the standard as follows: “A journalist should lose his or her job for misreporting, for misquoting, for fabricating, for plagiarizing, for systemic bias — but not for a message like this one.” Really? Misreporting? or Misquoting? So a journalist, according to Friedman should lose his or her job for what may have been a mistake but not for what is clearly a heartfelt bias towards one of the key figures in the most contentious issue that she covers?

I think what he meant to say is that journalists ought to have more latitude to express opinions in this new media age. I agree. But then the standard has to be changed for everyone not just for her, and even then, I am not sure she can keep covering this story.

It will be interesting to see if Friedman responds and where other members of the media fall on this issue.