Did Sec. Of State Hillary Clinton Forget That Gays Can’t Get Married? 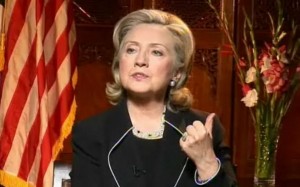 Secretary of State Hillary Clinton sat down with NBC’s Andrea Mitchell in Pakistan recently to discuss her current efforts in the region to gain government support against terrorist groups. However, thanks to a statement (or rather, lack of statement) about her daughter’s upcoming wedding, the takeaway from the extensive interview about her time in the Middle East is a short soundbite in which she seems to forget that gay Americans still can’t legally wed.

After talking at length about topics like insurgents, blacklisting possible terrorists, and how committed we are to the War in Afghanistan, Mitchell decided to end the chat on a high note and ask about Chelsea Clinton‘s approaching marriage to Marc Mezvinsky, and how the mother of the bride feels about the fact that it’s an interfaith pairing – Clinton is Methodist, Mezvinsky is Jewish. Here’s what Sec. Clinton had to say:

“It says a lot about this wonderful experiment known as America, where we recognize the right that every single person has to life, liberty and the pursuit of happiness, and over the years so many of the barriers that prevented people from getting married – crossing lines of faith or color or ethnicity – have just disappeared. Because what’s important is, are you making a responsible decision? Have you thought it through? Do you understand the consequences? And I think that, in the world that we’re in today, we need more of that.”

So if you’re a responsible American who understands the concept of consequence, you can get married, which is awesome. Wait – unless you’re gay. Sorry, I got America confused with Argentina. Clearly, many hurdles in marriage equality have been overcome in America, but coming from Clinton, who just a month ago made a powerful speech declaring that “human rights are gay rights and gay rights are human rights, once and for all,” this statement seems a tad lacking in gay-friendly rhetoric.