This Exists: Man Makes Viral Video Asking For Million Dollars; Someone Gives It To Him (UPDATE) 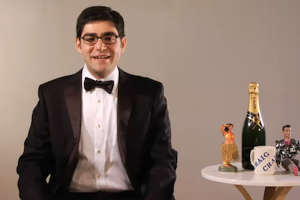 “Now here is a couple of seconds for you to resent me,” says Craig Rowin, a New York comedian, in a new video online. The reason he’s predicting resentment? A couple months ago, he made a video that simply featured him asking any millionaires out there if they’d please give him a million dollars. The video went viral and, now, it looks like he might actually get his wish! Yeah, I know, I know. We all should have thought of it first.

Rowin, an improviser at the Upright Citizens Brigade Theatre in New York and a contributor to The Onion, made his first million dollar video last November. In it, he politely asked anyone who wasn’t a millionaire to stop watching and then began listing celebrities who he thought were rich enough that they could lose a million dollars. Soon the video was popular enough that he was doing goofy interviews on local news shows in Alabama. A few videos later (he made one directed only at billionaires and one directed at corporations). All of that has paid off as a new video plays a clip of a voice mail message from a man named “Benjamin” who promises to finally make Rowin a millionaire.

Is this real? I’d say there’s an 60% chance it’s all an elaborate put on but, even if it is, it’s a pretty brilliant way to build up to a comedy show (Rowin explains in the video that Benjamin will be giving him the check live on stage on February 2nd). However, it is only a week after Chris Gethard, another UCB mainstay, managed to get Sean “Diddy” Combs to come to his comedy show by getting tons of comedy nerds to Tweet at him about it for a year so, you never know. Clearly we live in a magical world.

…at least, the New York comedy scene has been a pretty magical world lately. The rest of the world has been kind of sucky.

Whatever the case, we’re hoping it’s true. Merely because we really want Rowin to buy the Sarah Palin Xbox! I mean, what better way to spend the money?

UPDATE: He’s sticking to the claim that this is 100% legit. Absolutely amazing. I reserved my tickets to the show (they sold out pretty quickly after every website in the world picked this up) so I guess I’ll just have to wait and see.

SECOND UPDATE: 2/3/11
Hello, again. Well, I was went to the show last night and the entire thing was a hoax. It ended up being an incredible Andy Kaufman-esque “real or fake?” situation with the joke played up until the very last moment. I mean, they went all out on this thing. There was tons of security there, celebrity guests, press from all over the world. It was incredible. And then he lit the (fake) check on fire. Some were disappointed but I thought it was kind of brilliant (I might be swayed by the fact that I won one of the raffles they had and got some DVDs).
Check out an interview Rowin did afterwards here.

Check out two of Rowin’s videos below, the first one and the latest one in which he announces his success. The rest are available at his YouTube page.