This Week in Trump Administration Lies: Busloads of Misinformation

This Week in Trump Administration Lies: Busloads of Misinformation 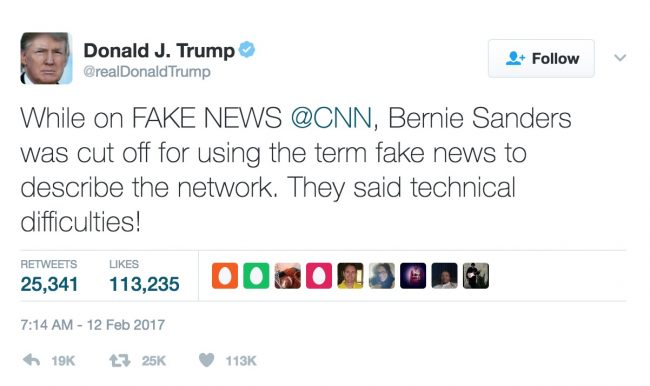 On today’s This Week in Trump Administration Lies, we aren’t just highlighting blatant statements of misinformation. We’re also looking at examples of pushback.

The first lie happened on February 10, when Donald Trump insisted that fraudulent votes were cast during the election of 2016 in the state of New Hampshire, which he won. He swore thousands of people were brought in by bus, which senior policy advisor Stephen Miller backed up a few days later. That simply did not happen, which former New Hampshire GOP chair Fergus Cullen knows perfectly well. Here’s the pushback: he called out the lie, offering $1,000 to anyone who could prove that people were bused into the state to cast illegal ballots.

On the 12th, Trump used Twitter to accuse CNN of cutting off an interview with Bernie Sanders after the senator joked about “fake news.” Once again, CNN’s PR account corrected him — this time by showing the transcript of the interview — then jumped in with their catchphrase: “Those are the facts.”

Sean Spicer misquoted Charles Krauthammer on the 14th, seemingly making up a phrase that the Fox contributor had not said. He also defended Mike Flynn‘s choice to reach out to Russian officials and Trump’s decision to ask Flynn for his resignation.

On Twitter and during a press conference on the 16th, Trump claimed he won 306 electoral votes when he really won 304. Moreover, at the presser, he swore he had the biggest electoral victory since Ronald Reagan. In fact, George H.W. Bush, Bill Clinton, and Barack Obama all won by larger electoral percentages. PolitiFact points out that his victory “ranks near the bottom, belonging somewhere between the lowest one-fourth and the lowest one-fifth of all Electoral College victories in history.”

Politifact wasn’t the only organization that called Trump out on that one. NBC News’ Peter Alexander stood up to ask a question at the press conference and told Trump that his statistics were all wrong. Then, he asked why Americans should trust a President who tells lies, only to be assured by Trump that the information had come from someone around him.

Note that we won’t include Kellyanne Conway claiming that the president had full confidence in Flynn mere hours before asking him to resign. In that instance, it’s hard to say whether she really knew Flynn was getting ousted or not. Or even if those few hours before the resignation was handed over, Trump really did still have confidence in him.