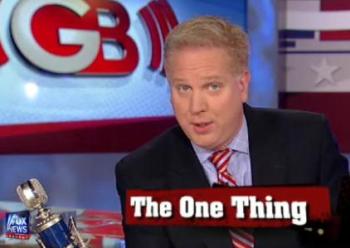 The New York Post reports a Long Island single mother of three was arrested Thursday for “scouting out and taking pictures” of an Air National Guard base, with an assault rifle, a shotgun and 500 rounds of ammunition in her car.

And wouldn’t you know, The Daily Kos finds today that this woman was a big Glenn Beck fan. Luckily this woman was stopped before she could hurt anyone, but it was only a matter of time before a Fox News host like Beck was going to inspire a crazy person to act on their already simmering feelings of government antipathy.

The Kos story cites the woman’s, Nancy Genovese, Myspace page (she’s also on Twitter), which has an embedded clip from Beck’s June 17 program and a post calling for others to re-post it (video is below). “I just saw Glenn Beck tell it like it is!” Genovese writes. Here’s some of what Beck said in that segment, speaking to President Barack Obama and Congress as a whole:

We are coming. We will be heard. We will be represented. You think that we are so busy with our lives that we will never come for you. And we were. But now you’ve gone and done it. We are the formally silent majority, all of us. Quietly work, pay our taxes, obey the laws, vote, save money, keep our noses to the grindstone – now looking up at you. You have awakened us, and a patriotic spirit so strong and so powerful. It had been sleeping too long. You have pushed us too far.

(One note on that ominous quote: this isn’t a “right” attacking “left” thing. Beck says a few sentences later, “Republicans, Democrats, Independents, Libertarians, understand this – we don’t care. Political parties are meaningless to us.”)

Beck does silly things on his FNC show like play Jenga, cut up a dead fish and play with dolls. And off the air, he comes off entirely self-aware and self-deprecating.

But there’s another side to Beck – the dangerous side, which we saw last week. When he spouts ridiculous bile like Pres. Obama having “a deep-seated hatred for white people” or “this guy is, I believe, a racist,” he stirs up the fears of the “silent majority” he spoke about in his segment that this crazy woman loved. In much the same way Bill O’Reilly came under fire after the murder of Dr. Tiller, Beck (and his fellow FNCer Sean Hannity) have used blatant propaganda-fueled scare tactics to grow the hatred of our current government situation – and grow ratings. Beck’s personal publicist declined comment for this story.

In this particular instance, Genovese was caught before she could do whatever she had planned next – we don’t know what that is since during her arraignment she “went berserk in the courtroom.” The Kos story speculates she thought the base could have been a FEMA camp – which is a storyline once brought up by Beck but was outright debunked on his program in April.

And that illustrates a larger point – Beck absolutely is an advocate of non-violence. He regularly hammers home this point. In fact, even in that same clip, he says, “We didn’t come in violence, we don’t come in violence, but we are angry.” But it’s not hard to imagine these individuals, who already have a preconceived idea about the way they want to deal with their qualms, hear Beck and pick the parts that speak to them, ignoring the rest.

Genovese was caught before anything could happen. But the next time a deranged Beck viewer decides to misinterpret the call to “come for you,” we may not be so lucky.

Here’s the video of the Beck segment Genovese was a fan of: