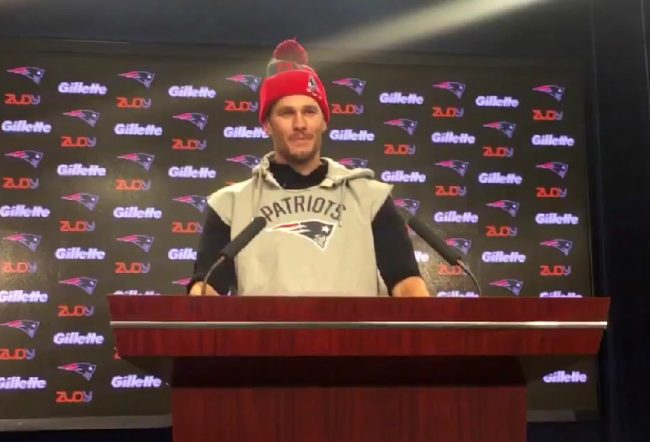 Tom Brady does not want to talk about his friend Donald Trump.

Speaking to reporters at Super Bowl Opening Night in Houston on Monday, the New England Patriots quarterback dodged questions related to the new President, whose “Make America Great Again” hat was once spotted in his locker.

“I’m not talking politics at all,” Brady said, according to the New York Daily News. “I just want to focus on the positive aspects of this game, my teammates and the reason why we are here.”

In response to a question asking for Brady’s thoughts about “what’s going on in the world,” Brady feigned ignorance.

“What’s going on in the world?” Brady said. “I haven’t paid much attention. I’m just a positive person.”

But one of his teammates was more open to speaking out on matters relating to the 45th President. According to the Fort Worth Star-Telegram Patriots tight end Martellus Bennett said he would probably skip the traditional White House visit for Super Bowl champions, should the Pats prevail on Sunday.

“I’ve got to win a Super Bowl [first], but most likely no,” Bennett said, when asked specifically whether he’d go to the White House.

When asked why, he said, “Because that’s not… I don’t support the guy that’s in the House.”

Earlier in the day, Bennett tweeted his opposition to the controversial executive order signed by Trump banning immigration from seven Muslim-majority countries.

America was built on inclusiveness not exclusiveness.