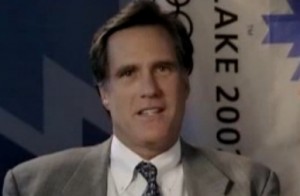 Aside from his record at Bain Capital, which hasn’t been the asset he thought it would be, Republican presidential nominee Mitt Romney spends a lot of time bragging about his work on the 2002 Salt Lake City Winter Olympics as a way to burnish his economic credentials. As it turns out, Romney’s stunning rescue of the Olympics depended on heaps of big government dollars, and while today’s Romney tries to make excuses for that, Romney used to brag about it.

There are lots of ways to slice and dice the money taxpayers spent on the 2002 Winter Olympics. Earlier this year, the DNC released an ad that put the figure at $1.3 billion, which, contrary to the Romney campaign’s assertions, doesn’t include costs associated with additional security following the September 11th attacks.

That figure, though, does include $1.1 billion in federal funds for infrastructure that eventually would have been spent in Utah anyway, but was rushed in for the games. Even if you exclude those funds, Mitt Romney’s Olympics received a higher percentage of their funding from the federal government than the previous two US games combined. Excluding that $1.1 billion and additional security costs related to the 9/11 attacks, the 2002 SLC Olympics received 18% of its funding from the federal government, versus 11% for the 1996 games in Atlanta, and just 5% for the 1984 Los Angeles Olympics.

Lest you think that Mitt Romney was a reluctant recipient of federal largesse, keep in mind that his Salt Lake City Olympics Committee “spent $3.5 million employing five lobbying firms in addition to its own in-house lobbying shop.”

Now that Mitt Romney is running for president on a platform of letting Detroit go bankrupt and not spending a single federal dime to put firemen, cops, and teachers back to work, it just wouldn’t do to have himself portrayed as a guy who was willing to drop federal coin on luge courses and the like. His campaign has tried hard to downplay the role of federal money in the Olympic bailout, which, I guess, makes this guy a liar:

That was Mitt Romney campaigning for Governor of Massachusetts in 2002, bragging about his skill at suckling the federal taxpayer teat, right in front of everybody (not in secret, as he did here). Winter sport? Yes. Cops, firemen, and teachers? No soup for you.

Mitt Romney is proud of his Olympic accomplishment, and maybe he should be, but it runs directly counter to his new argument that the federal government has no part in economic growth. As the election nears, the theme of Mitt Romney’s private sector experience will continue to clash with the huge helpings of taxpayer money that have fueled it, and with the 2012 Summer Olympics approaching, we haven’t heard the last of Mitt Romney’s torch.