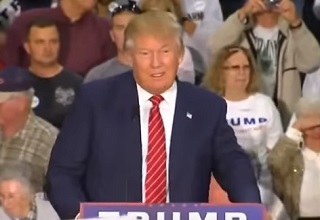 Despite whining about the CNBC Republican debate‘s original three-hour running time earlier this month, which forced the network to shorten the broadcast, Republican presidential candidate Donald Trump still isn’t happy with the 24-hour financial news network. Nor is he happy with his poll numbers in Iowa, which he seems to think aren’t being accurately reported by CNBC. Also, he wants more Iowans to vote for him. Basically, Trump isn’t happy.

During a Tuesday night rally in Sioux City, Iowa, Trump practically begged the state to increase his numbers in the polls. As NBC News reported, Trump told the crowd of 2,400: “Iowa, will you get your numbers up please?”

“Will you get these numbers up? I promise you I will do such a good job.”

Lester Holt and Chuck Todd discussed Trump’s recent fall in the Iowa polls and the New York real estate mogul’s response to the numbers, which he dubbed “not very scientific.” Was this all a part of the long-predicted “Trump flameout”?

Never one to simply sit by and take any crap, Trump took to Twitter Wednesday morning to respond. First, he praised the “packed auditorium” at his Sioux City rally and indirectly ridiculed CNBC’s upcoming “unfair debate.”

After a great evening and packed auditorium in Iowa, I am now in Colorado looking forward to what I am sure will be a very unfair debate!

Then he returned to the matter of his Iowa poll numbers, which CNBC’s Eamon Javers had earlier reported as slipping below fellow Republican presidential candidate Ben Carson‘s numbers.

Obviously, Trump was none too pleased about the network’s “fictious (sic) poll numbers.”

.@CNBC continues to report fictious poll numbers. Number one, based on every statistic, is Trump (by a wide margin). They just can’t say it! — Donald J. Trump (@realDonaldTrump) October 28, 2015

The undercard round airs at 6 p.m. ET, followed by the main event at 8 p.m. ET on CNBC. Here’s how you can watch it.