It’s all completely out of control now. 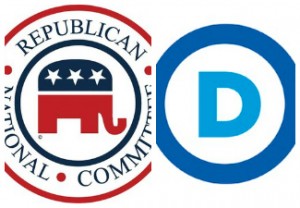 If the past few days are any indication, both party committees no longer have any control of its candidates and more importantly, the process.

On the Republican side is Donald Trump, who ironically decided he had heard enough snark out of Fox News over the past 24 hours, and will not provide the network the record-breaking ratings he brings to every debate by deciding to bow out of Thursday night’s event. From Trump’s perspective, he holds all the leverage in this situation. With Trump, Fox easily tops 20 million viewers and 25 million wouldn’t be out of the question.

Evidence: Non-political programs like Entertainment Tonight were already rightly hyping Thursday’s debate and particularly the Trump-Megyn Kelly rematch (my suddenly-outdated segment on Trump and Kelly that taped today before the Trump/out news is below). Why is ET relevant here? Millions of viewers who would never dream of tuning into a political debate would do so here, simply for the unpredictable, sensational, reality show aspect of it all. Without Trump, that number drops 40 percent. Easily. And if a CNN or MSNBC decide to carry the frontrunner’s proposed (still unclear) event to raise money for Wounded Warriors, or if Trump actually takes Ted Cruz up on the offer he made tonight on Mark Levin’s radio show to debate 1-on-1, watch out.

So does this move to drop out of the debate hurt Trump in the polls? Good luck answering that with any conviction. But here’s a hunch given everything we’ve seen to this point: His numbers will stay the same or even tick up. In the end, or at least until the Iowa Caucuses next week, he’ll ultimately be seen one of two ways: (A) A crybaby who can’t take criticism or (B) A leader who doesn’t take BS from anyone. Either way, 99 percent of his supporters will undoubtedly love the decision to bail.

As for Fox, know this: It has absolutely every right to defend Kelly against Trump’s barbs. But this particular and most recent retort went too far, made it way too personal (and arguably proved Trump’s point to his supporters around being treated unfairly by the network). Per a Fox statement Tuesday afternoon:

Sorry… that’s just not how a news organization should conduct itself regardless of how many times Trump has insulted the network or one of its moderators. Roger Ailes’ statement Tuesday afternoon on the matter was the proper one: “Megyn Kelly is an excellent journalist and the entire network stands behind her — she will absolutely be on the debate stage on Thursday night.” In being stern and professional, that should have been the only statement made by the network. But Fox decided to go another more personal route and got down in the mud with Trump instead. This doesn’t excuse Trump’s petulant antics or bizarre one-way attacks on Kelly (who has stayed above the fray since this began six months ago after the first debate). But two sides can be wrong in any instance, and this is no exception.

On the DNC side, it’s almost as messy: It’s hard to find anyone who agrees now with the strategy set forth by chairwoman Debbie Wasserman Schultz, who — in an obvious effort to shield Hillary Clinton from any risk of blowing her huge inherent lead this time around — scheduled only six debates (the party held 27 in 2008), including the three most recent ones on weekend nights. As a result, the audience numbers for the Democratic debates have been substantially lower than those on the GOP side (averaging about 18 million per debate for Republicans and under 11 million for Democrats, which is exactly what Wasserman-Schultz wanted).

So as Hillary continues to fall in the polls and is now at risk of losing Iowa while almost certainly getting blown out in New Hampshire, suddenly the Democratic frontrunner is in the mood to present herself on big national stages without the consent of the DNC. Exhibit A was CNN’s relatively impromptu Town Hall this past Monday night, which was not sanctioned by said DNC. And just today, MSNBC jumped into the fray… securing a previously-unscheduled debate now set for February 4th in New Hampshire. Takeaway from all of this: The DNC is no longer calling the shots.

Trump is out (for now) of Thursday’s night debate. He may spar with Ted Cruz or simply create some kind of counter-programming on another network which will be happy to have him. Meanwhile, those running on the Democratic side are taking matters into their own hands via Town Halls and debates that weren’t on the docket when this whole crazy process on both sides began.

It’s all out of control now. RNC. DNC. Both SOL. One thing is clear: If you’re in it solely for the entertainment of it all, there isn’t enough popcorn in the world to keep up.

Joe Concha on Entertainment Tonight earlier on the Trump-Kelly feud, Courtesy of CBS