Trump: Jeff Bezos Is Using WashPo as a ‘Tool for Political Power’
Video

Trump: Jeff Bezos Is Using WashPo as a ‘Tool for Political Power’ 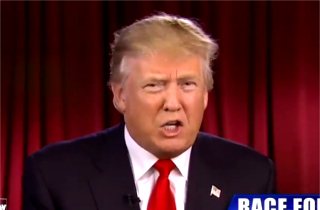 On Hannity Thursday night, Donald Trump derided the reports that the Washington Post was devoting 20 reporters to investigating the candidate’s past — saying that the paper’s owner, Amazon founder Jeff Bezos, was using the paper as a “tool for political power.”

Hannity suggested that the paper’s investigation may have been part of the “Clinton machine” smear operation.

Trump argued that the paper was being used as a weapon by Bezos, who was attempting to preclude some kind of anti-trust investigation into his businesses from a hypothetical Trump administration.

Or, in the candidate’s own words:

Yeah. It’s interesting that you say that, because every hour we’re getting calls from reporters from the Washington Post asking ridiculous questions. And I will tell you. This is owned as a toy by Jeff Bezos who controls Amazon. Amazon is getting away with murder tax-wise. He’s using the Washington Post for power. So that the politicians in Washington don’t tax Amazon like they should be taxed. He’s getting absolutely away — he’s worried about me and I think he said that to somebody — it was in some article — where he thinks I would go after him for anti-trust. Because he’s got a huge anti-trust problem because he’s controlling so much. Amazon is controlling so much of what they’re doing. And what they’ve done is he bought this paper for practically nothing. And he’s using that as a tool for political power against me and against other people. And, I’ll tell you what, we can’t let him get away with it. So he’s got about 20 — 25 — I just heard they’re taking these really bad stories — I mean, they, you know, wrong, I wouldn’t even say bad. They’re wrong. And in many cases they have no proper information. And they’re putting them together, they’re slopping them together. And they’re gonna do a book. And the book is gonna be all false stuff because the stories are so wrong. And the reporters — I mean, one after another — so what they’re doing is he’s using that as a political instrument to try and stop anti-trust, which he thinks I believe he’s anti-trust, in other words, what he’s got is a monopoly. And he wants to make sure I don’t get in. So, it’s one of those things. But I’ll tell you what. I’ll tell you what. What he’s doing’s wrong. And the people are being — the whole system is rigged. You see a case like that. The whole system is rigged. Whether it’s Hillary or whether it’s Bezos.

“Listen. Let me — He’s using the Washington Post which is peanuts — he’s using that for political purposes to save Amazon in terms of taxes and in terms of anti-trust!” Trump concluded.