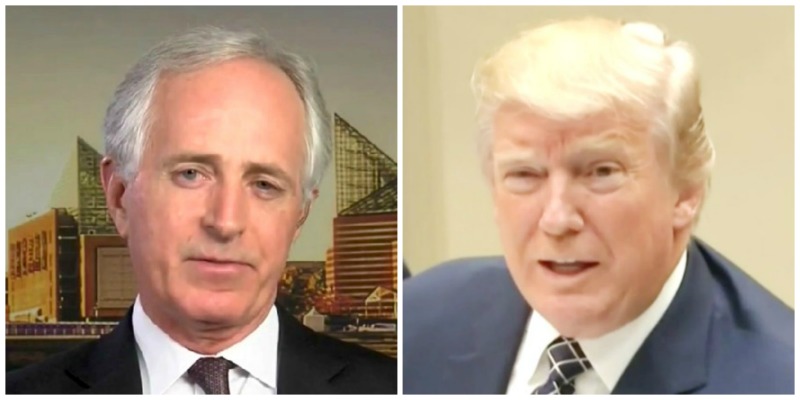 We’ve been told time and time again that Donald Trump is a “counterpuncher” and when someone hits him, he hits back “ten times harder.” It’s been said by his supporters since he launched his candidacy in 2015 and it holds true today. And as we’ve seen, he’ll go after anybody from men, women, the media, Hollywood, the NFL, to both Democrats and Republicans. It’s this fascination of him being such a nonstop fighter (even when he was wrong) that helped him get elected.

Sen. Bob Corker (R-TN) is the latest person to come in Trump’s crosshairs. He has been critical of the president in recent months but ratcheted up his remarks last week when he claimed that Secretary of State Rex Tillerson, Secretary of Defense James Mattis, and White House Chief of Staff John Kelly “help separate the country from chaos.”

Trump shot back on Twitter, claiming Corker “begged” him to endorse him for his re-election campaign (Corker has said he is not seeking another term) to which the president allegedly said “NO.” It’s quite humorous seeing him try to taunt Corker by withholding his endorsement just weeks after his candidate Luther Strange lost his GOP Alabama primary against Roy Moore, proving his endorsement isn’t as magical as he believed.

Corker then hit back by tweeting it’s a “shame the White House has become an adult day care center. Someone obviously missed their shift this morning.”

Then in an interview with The New York Times, Corker slammed Trump’s threats to countries like North Korea, which he believes could put the U.S. “on the path to World War III.” Trump reacted to “Liddle” Bob Corker by claiming the NYT “set him up” by recording the conversation. The NYT rebuked the claim by stating that Corker had asked for their conversation to be recorded.

Corker isn’t the first Republican Trump has gone after. From Senators John McCain and Jeff Flake, to Rand Paul and Senate Majority Leader Mitch McConnell, these feuds aren’t anything new. However, what is new are the insane defenses that Trump loyalists have used against Corker.

Let’s start off with the hosts of Fox & Friends. Most people know the program is a safe space for Trump, but their attempt at shaming Corker was weak, even for them. Brian Kilmeade thought Corker could have shared his thoughts “personally and privately” instead of the NYT but did not acknowledge the fact that Trump’s personal attacks are always on Twitter for the world to see. Ainsley Earhardt called it “disrespectful.” Meanwhile, Trump literally called the senator “Liddle Bob Corker.”

Here’s what I don’t get: they’ll always defend Trump for being a “counterpuncher,” but when someone like Corker reacts to that counterpunch with another counterpunch, all of a sudden he’s being “disrespectful?” Is anyone allowed to counterpunch besides Trump? It seems to them that no one else can.

Look, I’m no fan of Corker, but whether Trump likes it or not, he has to deal with him for another year. And in a Senate where the GOP holds a slim majority, Trump cannot afford to lose another Republican! Doesn’t he remember the disastrous Obamacare repeal efforts? John McCain, Susan Collins, and Lisa Murkowski are flakier than Jeff Flake. Nearly any bill whether it be health care or tax reform without at least the support of two of them is dead. Add Corker to the list and Trump’s legislative agenda is six feet under until the 2018 midterms at the earliest. So it’s Trump who’s being “incredibly irresponsible” because his ego may prevent Republicans from passing anything.

Finally, former White House Chief Strategist Steve Bannon said that Corker should “resign immediately” for his remarks. I honestly don’t think Bannon is as crazy as many on the left believe, but demanding Corker’s resignation over this is off-the-wall looney. Did we ever hear Bannon call for the much worthier resignation of “pro-life” Rep. Tim Murphy after he told his mistress to have an abortion? I don’t think so.

Trump loyalists will obviously follow the president’s playbook no matter what and I’m not telling them to do otherwise, but perhaps they should stop and think about if what they’re about to say actually helps him or not. Even if they still think Corker is wrong, this nonsensical pile-on is unproductive and only encourages him to “resist” Trump’s agenda. While Trump may love to escalate feuds, maybe it’s best for his supporters to chose their battles wisely.